Artichokes are flower buds. Once they bloom, they become inedible, but before then, they’re a glorious and special food. They’re fresh now (Spring), so go to your local fruit & vegetable monger and get some. When I’m in Naples during the season, I don’t mind at all having artichokes every day and I always hope they’re on the menu wherever I go.

Artichokes originate from the Mediterranean and have been used as food by the ancient Greeks and Romans. Neapolitans began cultivating the globe artichokes – one of the most common and best varieties that we use now – sometime in the 9th century and were brought to Florence in the 15th century.  The Dutch brought them to England in the 16th century and French and Spanish immigrants brought them to the USA in the 19th century.

The word for artichoke in Italian is carciofo (and similar words are found in other European languages) and the term itself comes from the Arabic word al-khurshūf, which spread from medieval Spain when Muslims ruled a large part of the Iberian peninsula. I love learning stuff like this. Don’t you?

The key to making pasta with artichokes (and fusilli are a perfect shape to soak up the flavours yet not overtake the plate) is the artichoke: it must be small because it will be more tender. The larger the artichokes, the tougher they will be and that’s not suitable for this dish. Recipe after the photo. Serves two. There are a few steps to this, but I promise it’s easy and quick. 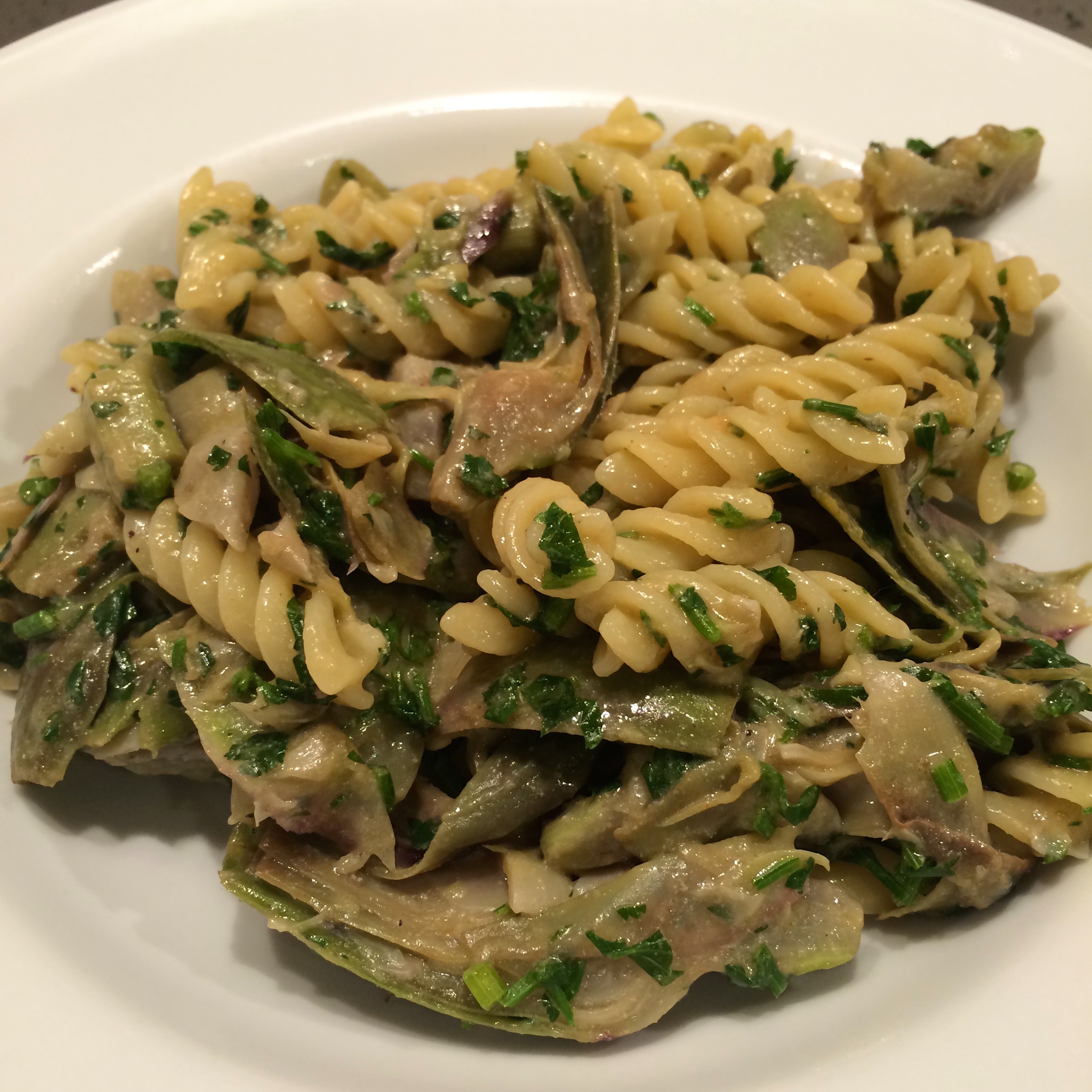 Thoroughly wash the artichokes, inside and out, by making some space in the bud with your fingers. Prepare a large bowl of cold water and add a sprinkle of salt and the lemon juice. You will use this in a minute.

Peel off and discard the hard outer leaves. When you get to the light green ones, you know you have taken off enough. Chop the artichoke stem at the base and scrape off the fibrous outer section with a potato peeler. Chop the inner stem core and place in your bowl of water. Cut the artichoke in half and remove the small triangular section at the base of the leaves because it is too fibrous and prickly to be eaten pleasantly.

Here’s a photo. The one on the bottom left still has the section, while the upper right does not. Also note the difference in colour of the two sections. The reason for that is that artichokes oxidise very quickly. That’s why you need the salt and lemon water to stop that from happening. So, as you prepare the artichokes, place them in the water. 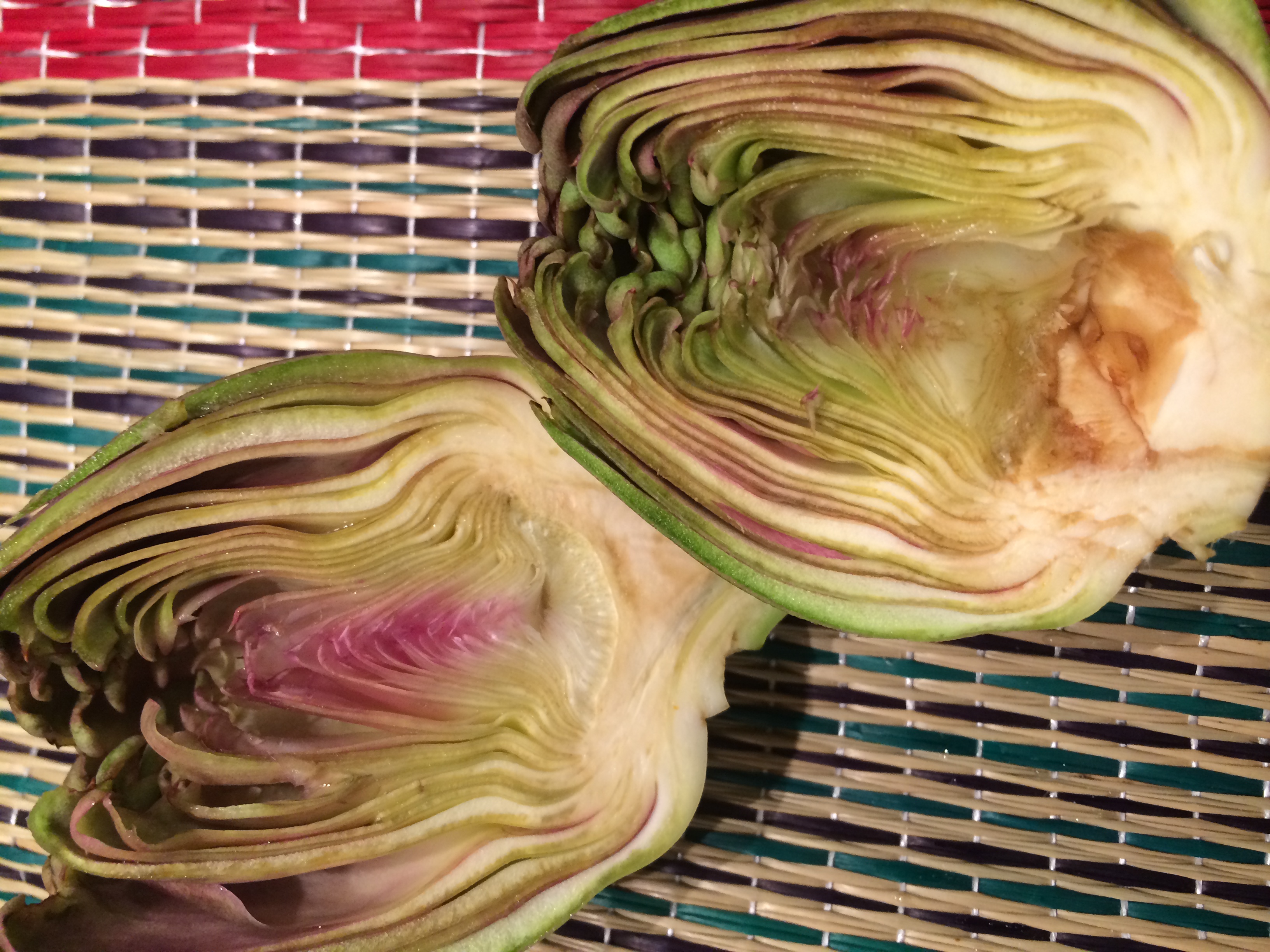 Cut each artichoke half into smaller pieces, lengthways. How many slices will depend on the size of the artichoke. Once you’ve finished preparing the artichokes and are ready to cook them, then drain and discard the water. You can leave the artichokes in the water for several hours before you cook them.

As the artichokes are cooking, start boiling the water for your fusilli. Remember, add some salt to the water before putting in the pasta, only put in the pasta when the water is at a roiling boil and add a glug of olive oil to the water so the pasta doesn’t stick (and NEVER EVER rinse pasta after you drain it).

Separately, in a saucepan sufficiently large to hold the artichokes and the pasta, heat 2 tablespoons of olive oil and the garlic over medium-high heat. Remove and discard the garlic once it has become golden. Add the artichokes and stir them to coat well with the garlic infused olive oil. Add the olives, the vegan smoked cheese (15 minute recipe here. I make this in advance and keep it in the freezer) and parsley. Stir well until the cheese has melted. Add the capers at the end (because they’re delicate and don’t require cooking). Remember that if you are using the olives and the capers, you will not need to add any salt to the artichokes because each of these two items is salty enough. Then set aside, uncovered, on just warming heat until the pasta is ready.
Just before you’re ready to drain the pasta, carefully scoop out a bit of the cooking water and set aside. Once the pasta is ready, drain well and combine the pasta and the artichokes. If the mixture is a bit dry, use a spoonful at a time of the pasta cooking water that you’ve set aside and mix thoroughly. Season with salt and pepper to taste.

Serve immediately with nutritional yeast flakes sprinkled atop. And, frankly, this dish is delicious the next day IF there are any leftovers.