Wales has St. David; England St. George; Scotland St. Andrew and Italy has a lot of other saints. One in particular stands out. On 19 March, Italians celebrate the feast day of St. Joseph and it is also Father’s Day.

In Naples, we tend to celebrate events and feast days with pastries (ok and all kinds of food all the time, but you catch my drift). Zeppole were invented by monks in a convent. In 1836, the first written recipe for zeppole makes its appearance in a cookbook, partly written in Neapolitan (now recognised as a language by UNESCO), by Ippolito Cavalcanti, a Neapolitan nobleman. His book not only contained his own recipes reflecting the cuisine of the noble classes, but it was also a collection of the home cooking  done by the lower classes in Naples – cucina povera in all its glory.

Our noble Cavalcanti may have needed an editor because he titled the book: Cucina teorica-pratica col corrispondente riposto ed alcune nozioni da scalar … con in fine una cucina casereccia in dialetto napoletano. And this translates to the tongue rolling: Theoretical and practical cooking with corresponding secrets and certain lessons to  learn … and finally, home cooking in Neapolitan dialect. This book must have been meant to ensure full employment for chefs and cooks!

These zeppole are baked, rather than fried. Recipe after the photos.

The dough rings before they went into the oven 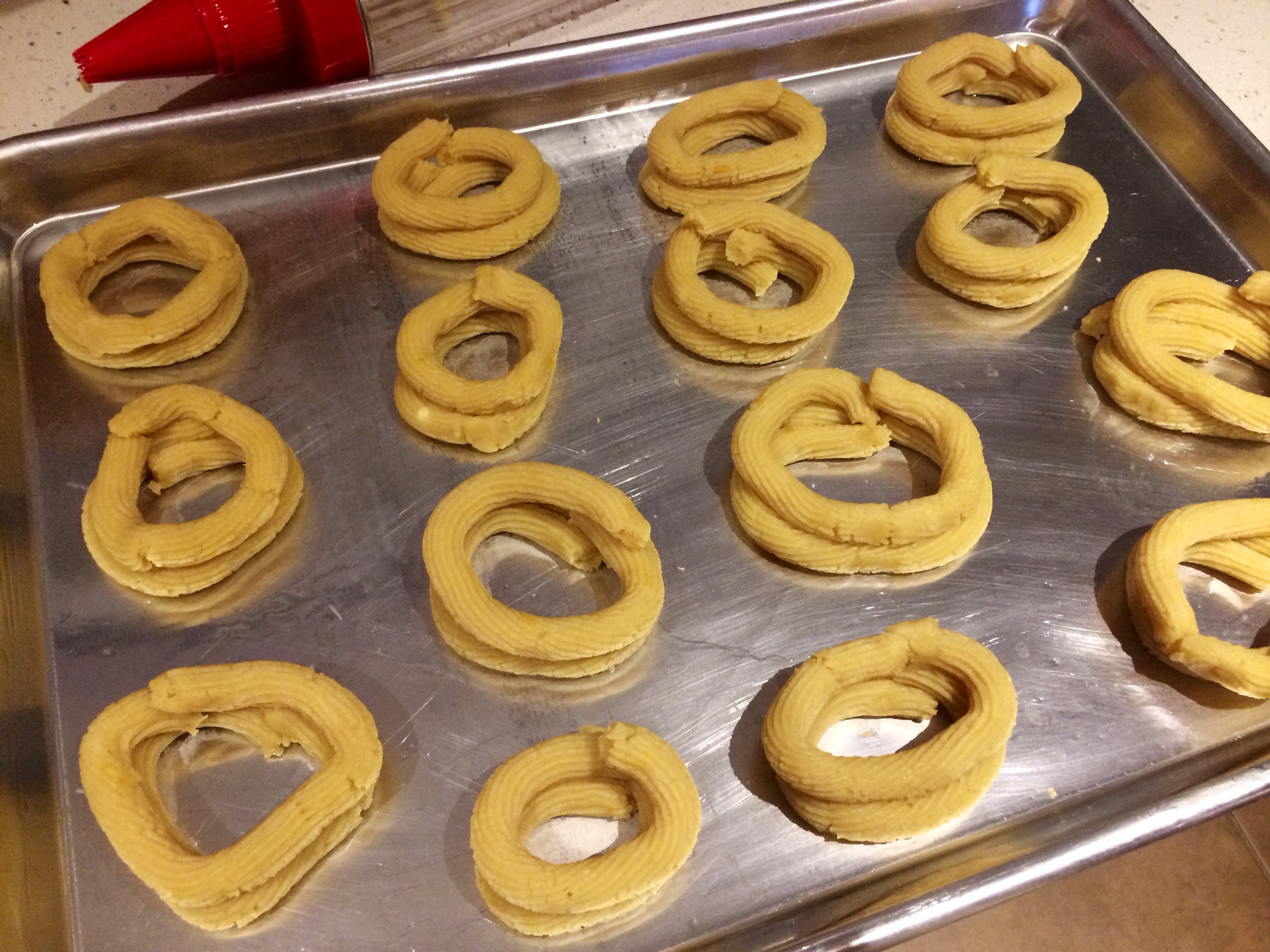 And the finished products 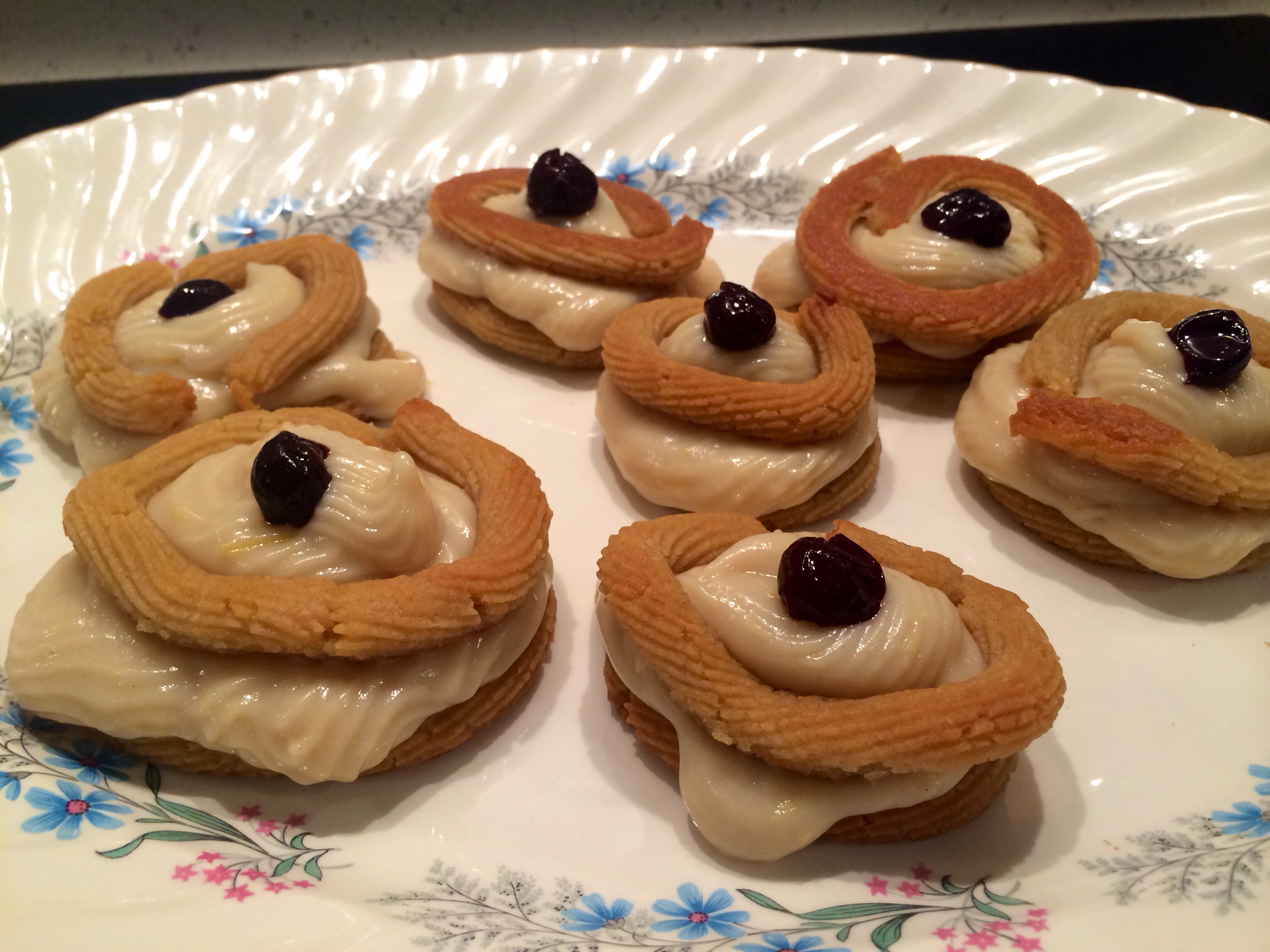 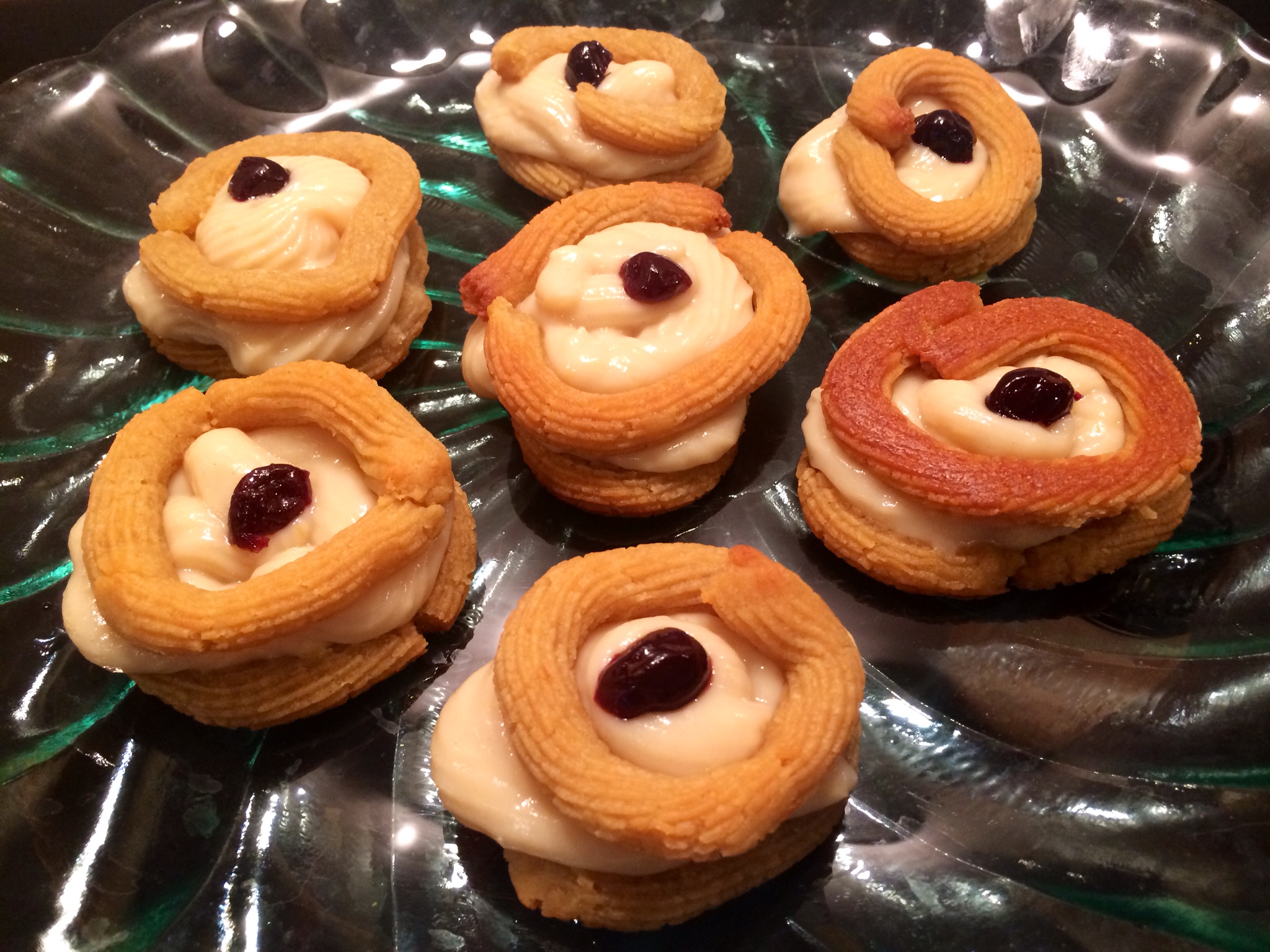 Ingredients (yields 14/15 zeppole)
For the dough:

First, prepare the custard. In a bowl, whisk the flour and 1/2 cup of soy/almond milk. Set aside. In a separate bowl, pour the remaining 1 1/2 cups of soy/almond milk and whisk in the sugar and salt. Make sure it’s all mixed in nicely. Pour the liquid into the soy and flour mixture and whisk away, making sure no lumps are left and then pour the mixture into a saucepan. Heat and stir frequently (especially as the mixture becomes more dense) over very low heat for approximately 20-30 minutes. The stirring minimises lumps. Once the mixture has become dense, whisk in the lemon juice and rind and cook for 2-4 additional minutes, always stirring. Pour the mixture into a glass bowl, set aside and then cover with a cloth and place in the fridge.

Second, prepare the dough. In a saucepan, place the water, olive oil and salt. Bring to a boil and remove from heat. A little bit at a time, add in the all purpose flour and mix well, smoothing out any lumps. Once you’ve obtained a smooth and solid consistency, place the saucepan back onto a very low heat and continue to mix together for 2-3 minutes. Turn off the heat (but keep the saucepan on the stove as the warmth will help you mix the rest of the ingredients) and add the sugar and yeast. Let the mixture warm up a bit and then add the lemon rinds. Mix well and then gradually add in the self-raising flour.

Third, oil a baking sheet. Then, place the dough mixture into a piping bag. Squeeze out the dough rings – one as a base and the other as the top and they should be one atop the other and continue doing this until you’ve finished your dough.  Leave 2-3cm between each zeppola. Bake for approximately 30 minutes or until golden. Take the zeppole out of the oven and off the baking sheet and allow to cool fully on a cooling rack.

Finally, once the zeppole are completely cool, separate each ring. Then, place the custard into your piping bag and squeeze the custard atop the base ring. You will then sandwich the separated ring atop the custard. At the summit of each zeppola, place a cherry.