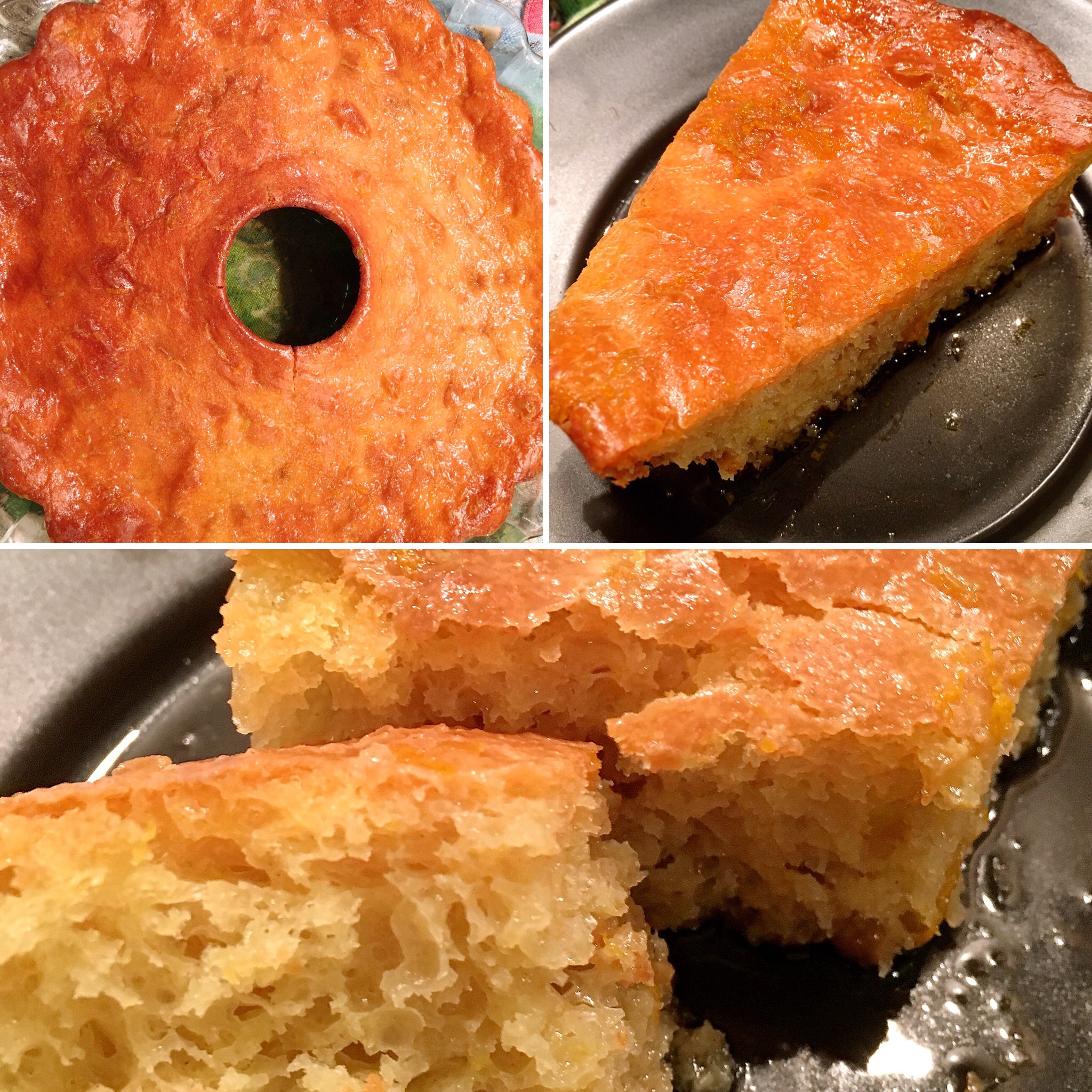 I have been wanting to veganise babà since the moment I went vegan. It is a delicious pastry and it is firmly planted at the centre my culinary cultural identity as a Neapolitan: an aromatic, fluffy, golden, melt-in-your-mouth, syrupy, sweet and spongy beacon.

If you have been to Napoli, you will certainly have seen babà (also spelled babbà). They are ubiquitous. Babà is so closely associated with Neapolitan cuisine that in Italian cookery books and on the internet, it is almost always referred to as Neapolitan babà. Neapolitans regard it as their traditional pastry and tradition is one of those nonsensical reasons for which we shouldn’t be vegan.

One of the recurrent themes of my blog is explore traditional foods to show that tradition is not an unchanging granite statue belonging to one culture. Tradition is something much more fluid with a past, present and future and, when it comes to food, tradition is no good reason to continue to use animals and their secretions. In this post, much longer than usual, I will take you on a historical and culinary journey. It is worth it and you’ll need the rum-soaked babà at the end!

Babà is also known as rum baba or baba au rhum and it is closely related to the Savarin. The original cake was the babka, a Polish yeast cake, and the word babka is diminutive for baba, meaning old woman or grandmother in Slavonic languages. In the early 18th century, the exiled Polish king, Stanisław Leszczyński and his pastry chef, Nicolas Stohrer, created the babà almost like the one we know today. But it was the King’s daughter, Marie Leszczyńska, who was the catalyst for the babà’s culinary journey to Naples. Marie married King Louis XV in 1725. At the time, the court in Versailles was the centre of all that was fashionable in the world. Stanisław followed Marie to Versailles and, of course, took the babà to France. He then opened a fashionable pastry shop in 1730.

How then, from Versailles to Naples? From 1734, Naples was ruled by the Bourbons (although of Spanish descent, there was a deal that the Spanish and Neapolitan kingdoms would not share a crown) and known as the Kingdom of Naples and Sicily. In April 1768, King Ferdinand IV, one of the Bourbon kings, married Maria Carolina of Austria. So? What does this have to do with babà? Stay with me, here, it will all come together in a moment.

Maria Carolina was the sister of Marie Antoinette (the future, ill-fated Queen of France) and the goddaughter of King Louis XV of France and his queen, Marie (née Leszczyńska… we met her just above). Maria Carolina’s mother was the powerful Empress of Austria and she made a deal that her daughter would marry King Ferdinand IV if, once she bore him a son, she would then be given membership to the Privy Council, a position of great power.

Maria Carolina bears a son and for all intents and purposes, becomes the ruler of King Ferdinand IV’s kingdom of Naples and Sicily. She was very clever and interested in rejuvenating court life, making Naples (the capital of the kingdom) a centre of the arts, often hosting salons to promote these and other interest.

Queen Maria Carolina succeeded and Naples and the kingdom became one of the most sumptuous and rich courts in Europe, attracting wealthy aristocrats from all over the globe. Of course, one cannot have a sumptuous court or host salons without good food and Queen Maria Carolina thought Neapolitan cuisine was unsophisticated. Her connections to France proved invaluable in this case and, in the late 1700s, she asked her sister, Queen Marie Antoinette, to send trained, professional, French chefs to Naples. Soon after, all the aristocratic families in the kingdom each had their own French private chef. These French chefs were eventually referred to as “Monzù” in Naples and “Monsù” in Sicily, which were a benign corruption of the word monsieur (French for sir or mister). And, of course, the Monzù brought their babà to Naples. When the era of aristocracy came to an end in the late 1800s, many of the Monzù remained in Italy and continued to ply their trade in Naples, Sicily and beyond, whether as chefs or pâtissiers, and with them the babà also stayed and became a part of the Neapolitan pastry repertoire.

Today in Naples, the babà comes in two shapes, one is an individual-sized portion shaped like a cylinder with a mushroom top and the other is a circular cake with a hole in the middle. I have opted for the circular cake because it is less time-consuming and does not require the special moulds. I used a circular mould with scalloped edges that is traditionally used to shape the babà cake. However, you may use whatever circular baking dish you like, including one for Savarin.

The “traditional” rum syrup is often replaced for coffee or other flavours and whipped or ice cream and cherries often adorn the pastry. So even today, the tradition is evolving. I like the rum syrup and I don’t much care for whipped creams, but if you do, then go right ahead.

The recipe below will serve at six to eight people. 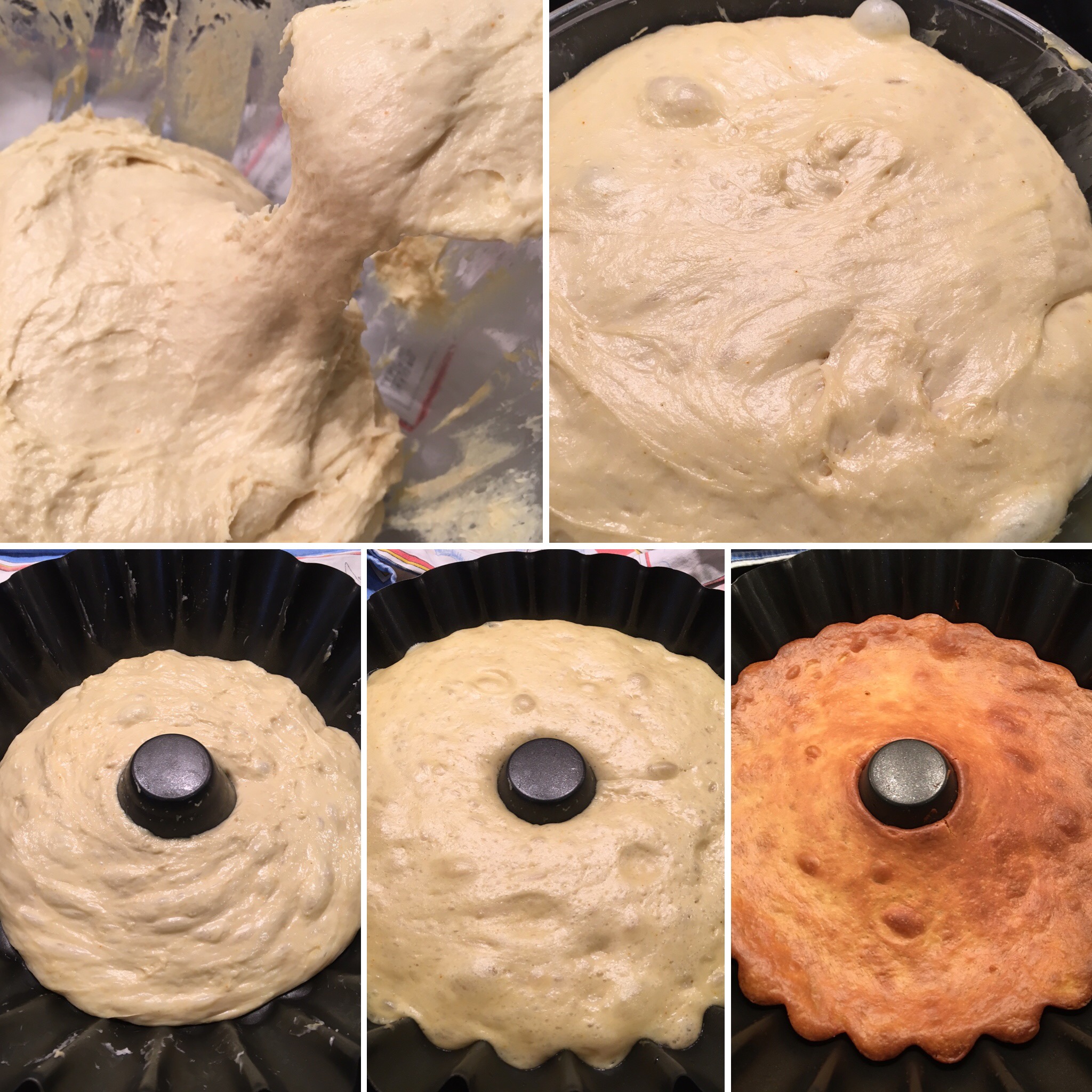 Ingredients
This recipe uses the incredibly inexpensive, versatile and you-already-have-it-in-your-kitchen aquafaba, the residual water from canned or cooked beans/legumes. Go to Aquafaba.com for its history and FAQs and to Vegan Meringue – Hits and Misses! for inspiration and discussion.
For the dough:

Melt the coconut oil and set aside. It must not be hot when you mix it into the cake batter (that would kill the yeast). It should be room temperature when you are ready to mix it in.

Whisk the aquafaba for about a minute until it froths up and the froth bubbles stay up (see photo below). Set aside momentarily. 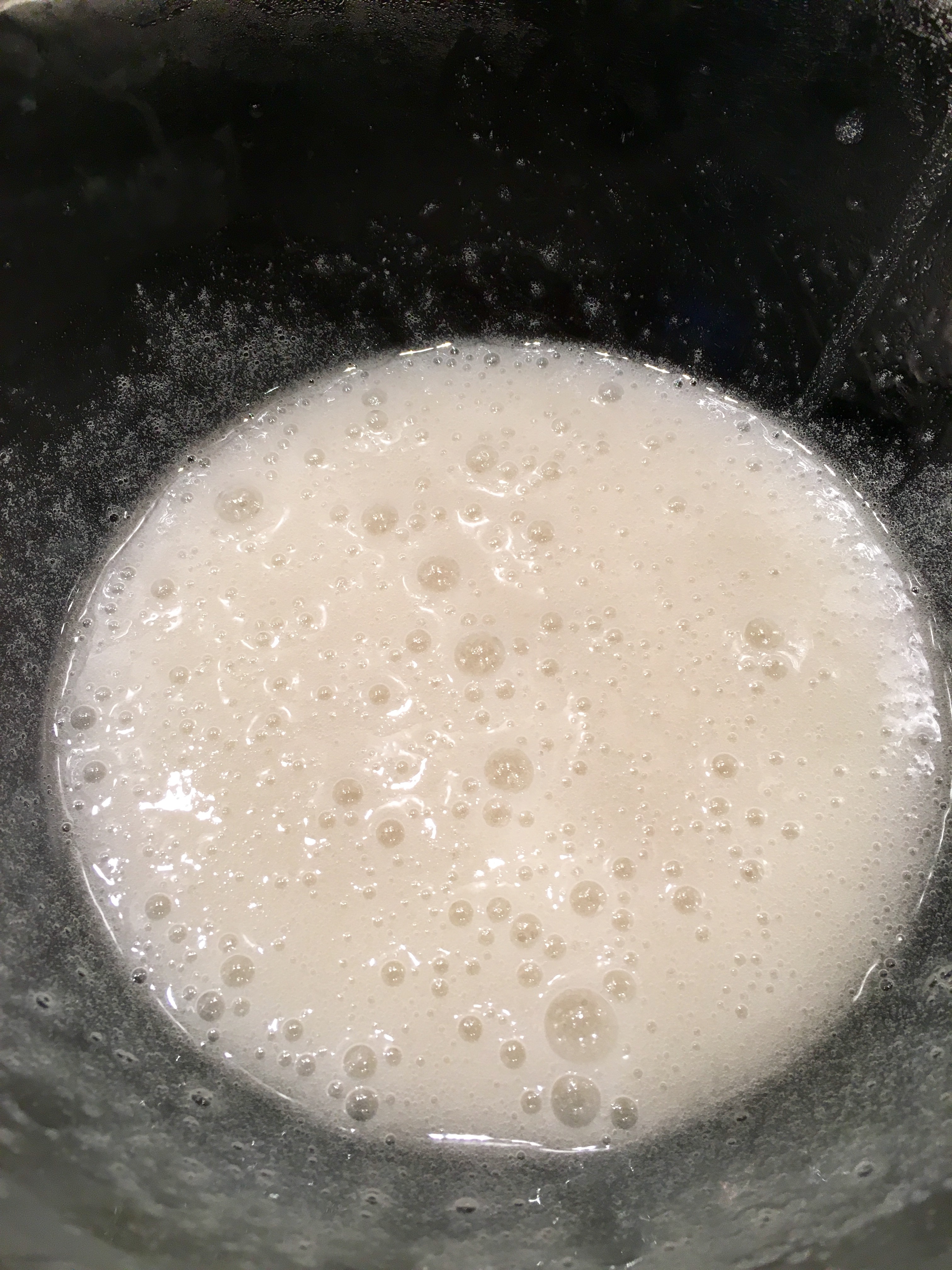 Sift the flour into a large mixing bowl. Don’t skip this step. It helps in aerating the flour and we need air and bubbles in this cake. Create a well in the centre of the flour and add all the dry ingredients. Mix well. Add all the liquid ingredients and mix well with a spatula or spoon until all the ingredients are well amalgamated.

If you have a hand mixer, use the dough hooks to knead the dough. If you do not, then use your hands and knead the dough either in the mixing bowl if it’s large enough (this is preferable) or roll onto a lightly floured surface (this is less ideal because the dough will be very sticky, so make sure you have plenty of flour to help you in the process). Knead the dough until it becomes very elastic (at least 15 minutes). The elasticity means that the gluten has been properly and fully released. 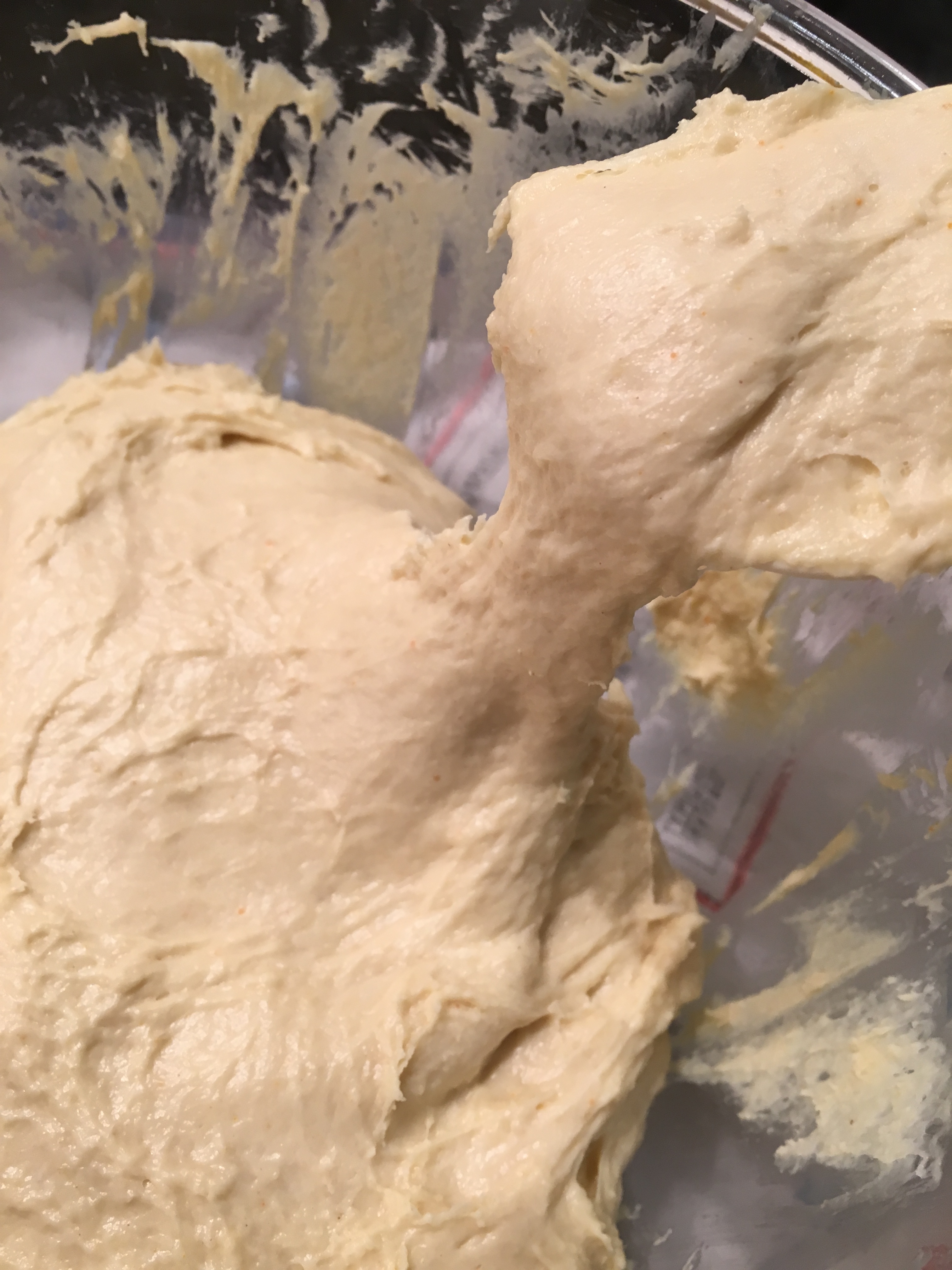 Place the dough into a large bowl, cover with a tea towel and let it rise in a warm, dry space. I use a glass bowl and I place it in the oven. If you opt for the oven method, then turn the oven on its lowest possible setting. Depending on your oven, this will mean that a light will turn on or you will hear the fan noise. You want the lowest of temperatures. If the temperature goes to 40C, then the yeast will die and the dough not rise. Let the dough rise to approximately twice its size. This can take up to 90 minutes. 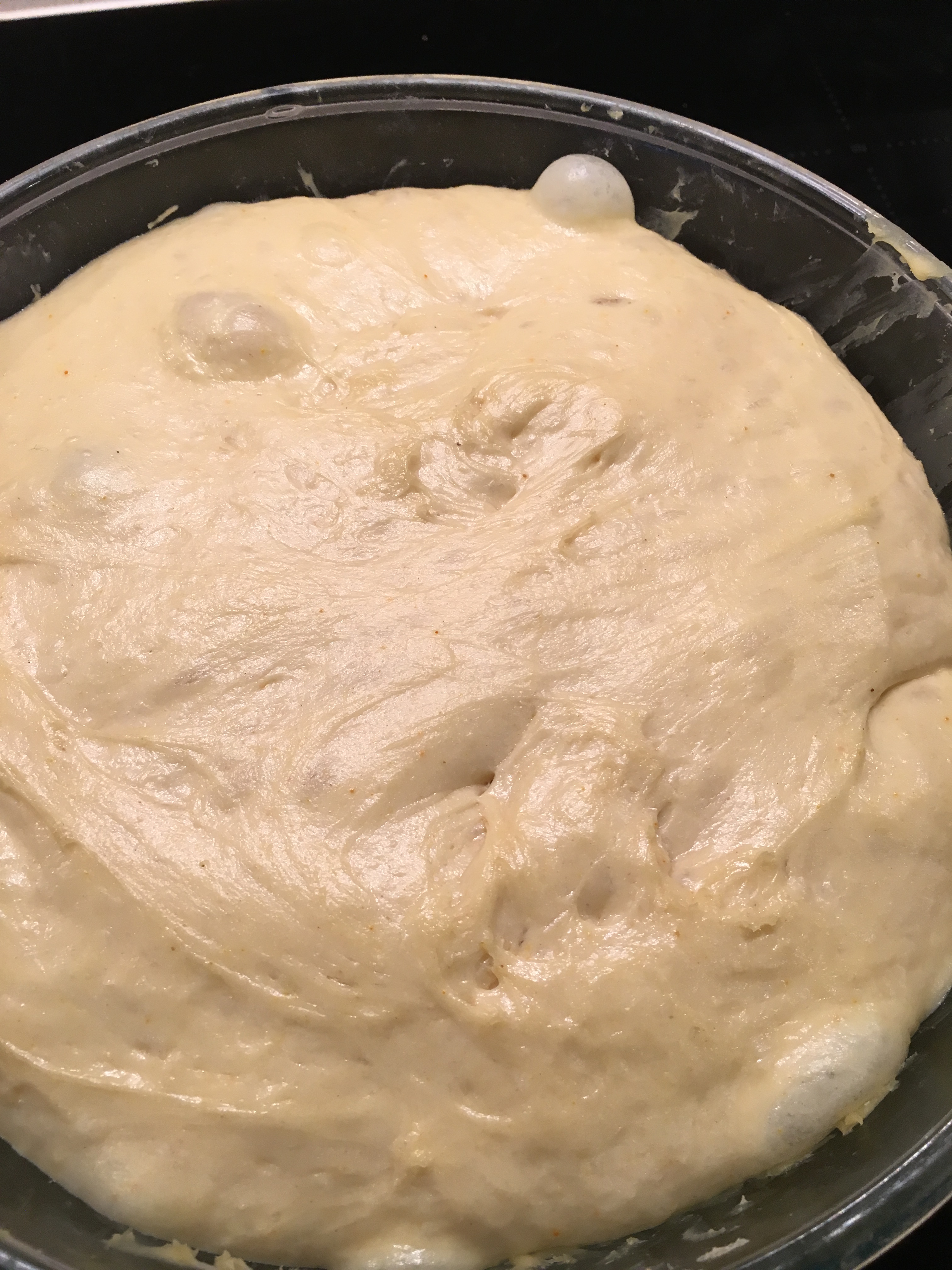 When the dough has risen, gently pour it out into your lightly greased circular baking dish (or cake pan) and gently ensure that the dough evenly fills the bottom of the baking dish. You can use a 22cm silicon dish/pan or something slightly larger or even a bundt cake pan. 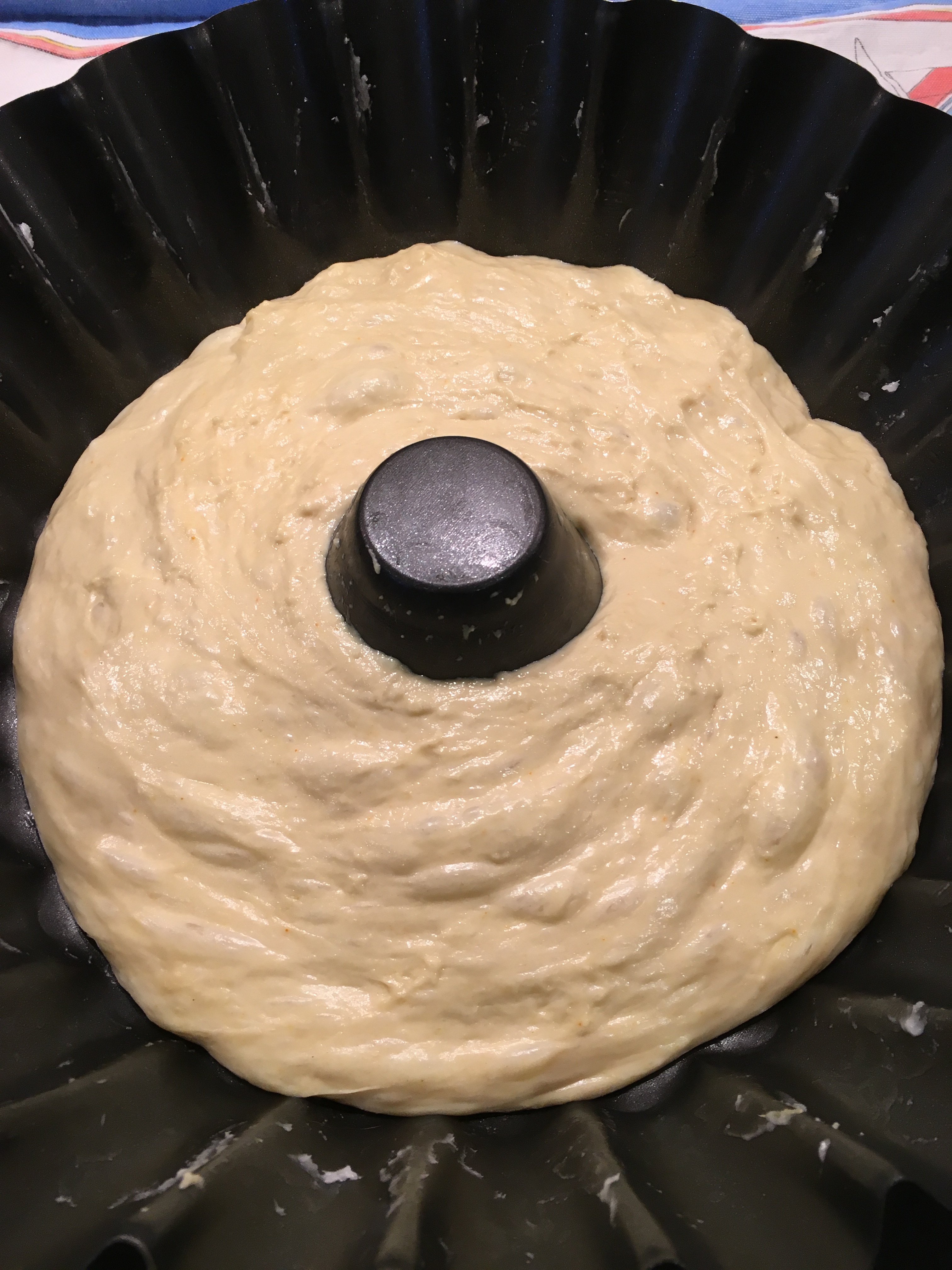 Cover the baking dish with a tea towel and let it prove once again until the dough is approximately twice in size. This could once again take up to 90 minutes.
When the dough has risen, preheat the oven to 180C and bake for anywhere between 15 and 30 minutes, depending on your oven. Once you start smelling the scent of the babà baking, you should have a look. If it is golden and firm, then it is ready. Turn off the oven and let the cake stay in for another 5-8 minutes. Remember, you will douse the babà with syrup, so it needs to be quite dry. 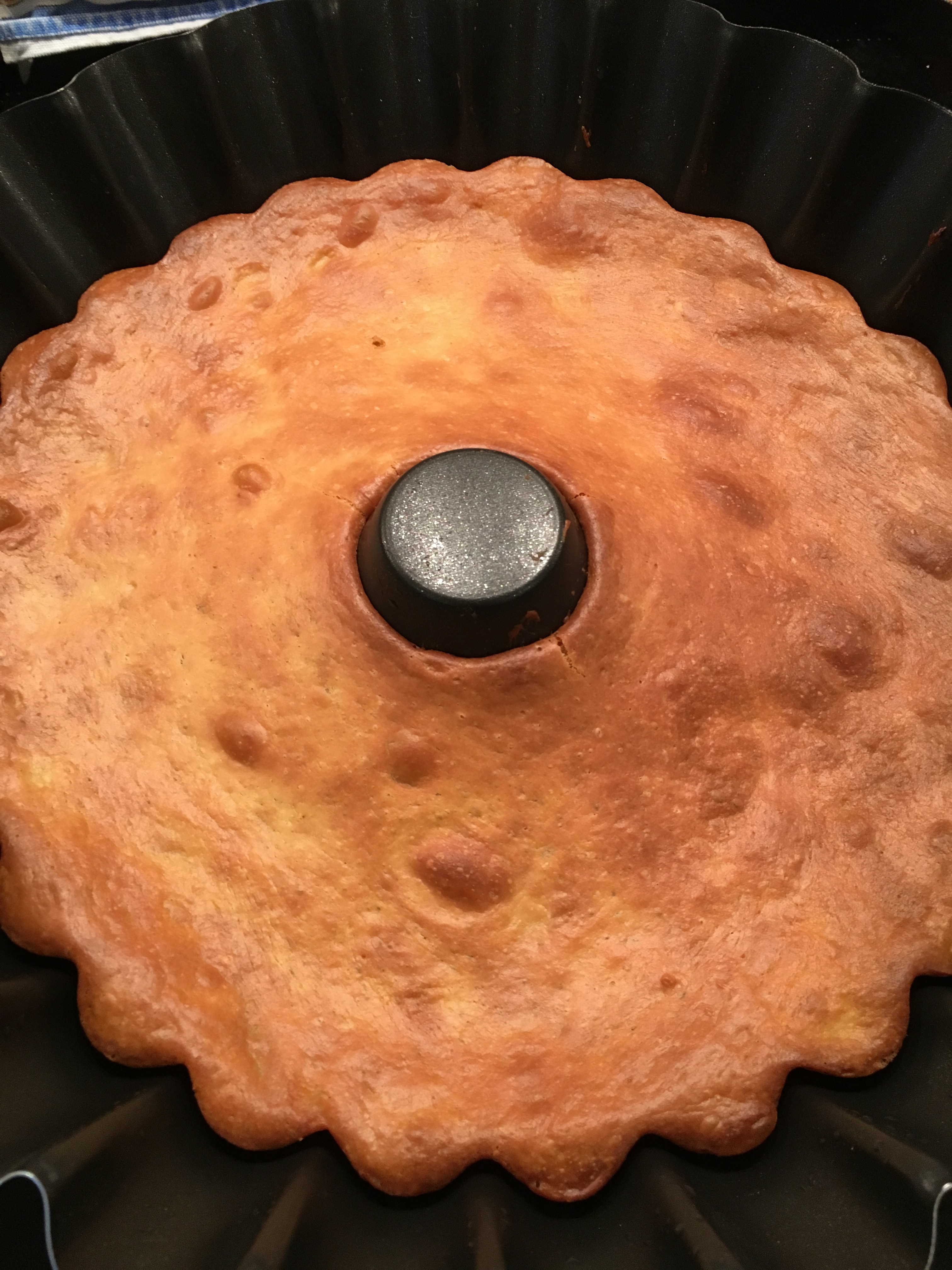 Take it out of the oven and let it cool completely in its dish/pan. Once the cake pan has cooled, place the babà on a cooling rack. 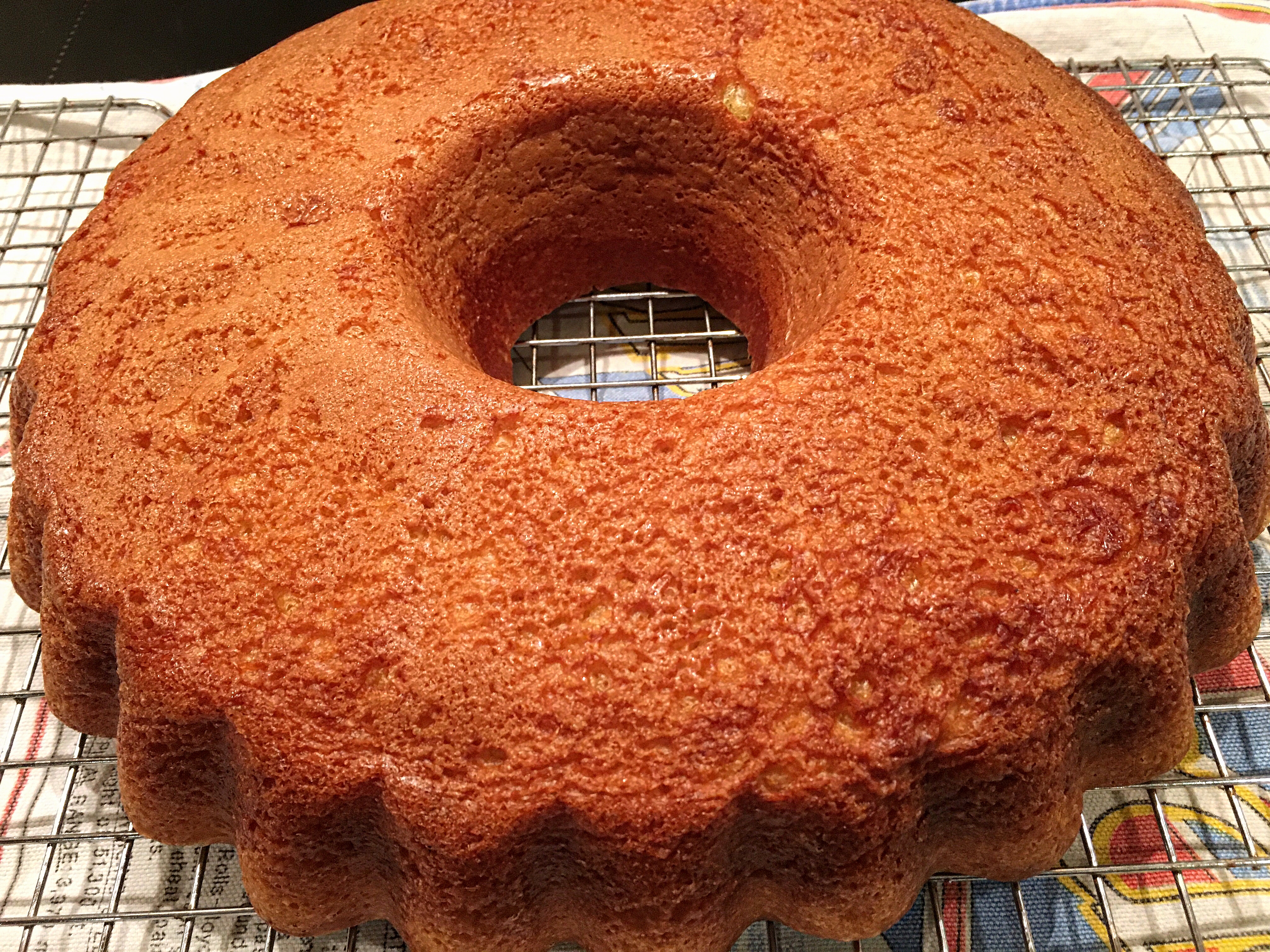 While you are waiting for the babà to bake, prepare the syrup. Place the water, sugar and peels into a medium sized saucepan and let it come to a boil. Lower to minimum and ensure the sugar has fully melted. Let the water mixture cool completely before mixing in the rum.

Once the babà has completely cooled on the cooling rack (and this can be overnight), place it back into its mould (head down, bottom up, if you will). Poke little holes in the base with a toothpick or skewer (that go all the way through). Strain the rum syrup through a fine sieve and reserve the orange and lemon peels. You will reuse these when you make the simple sugar and water syrup (without rum). You will also strain the simple sugar and water syrup and reserve it in case the babà needs more moisture upon serving. If you have a spray bottle, that would be perfect.

Gently pour the rum syrup into the babà, around the sides and so on. You want to get it as moist as possible. Let it soak in and rest for a few hours. The babà should be very moist and some of the syrup should ooze out easily. If it does not, then use some of the simple sugar, water and zests syrup that you reserved.

When the babà has soaked up all the syrup, cover the mould with a large serving dish and flip it over. The babà will then transfer to the serving dish.
Glaze with apricot jam by melting the jam in a small saucepan over low heat and brushing onto the top and sides of the babà with a spatula or brush. 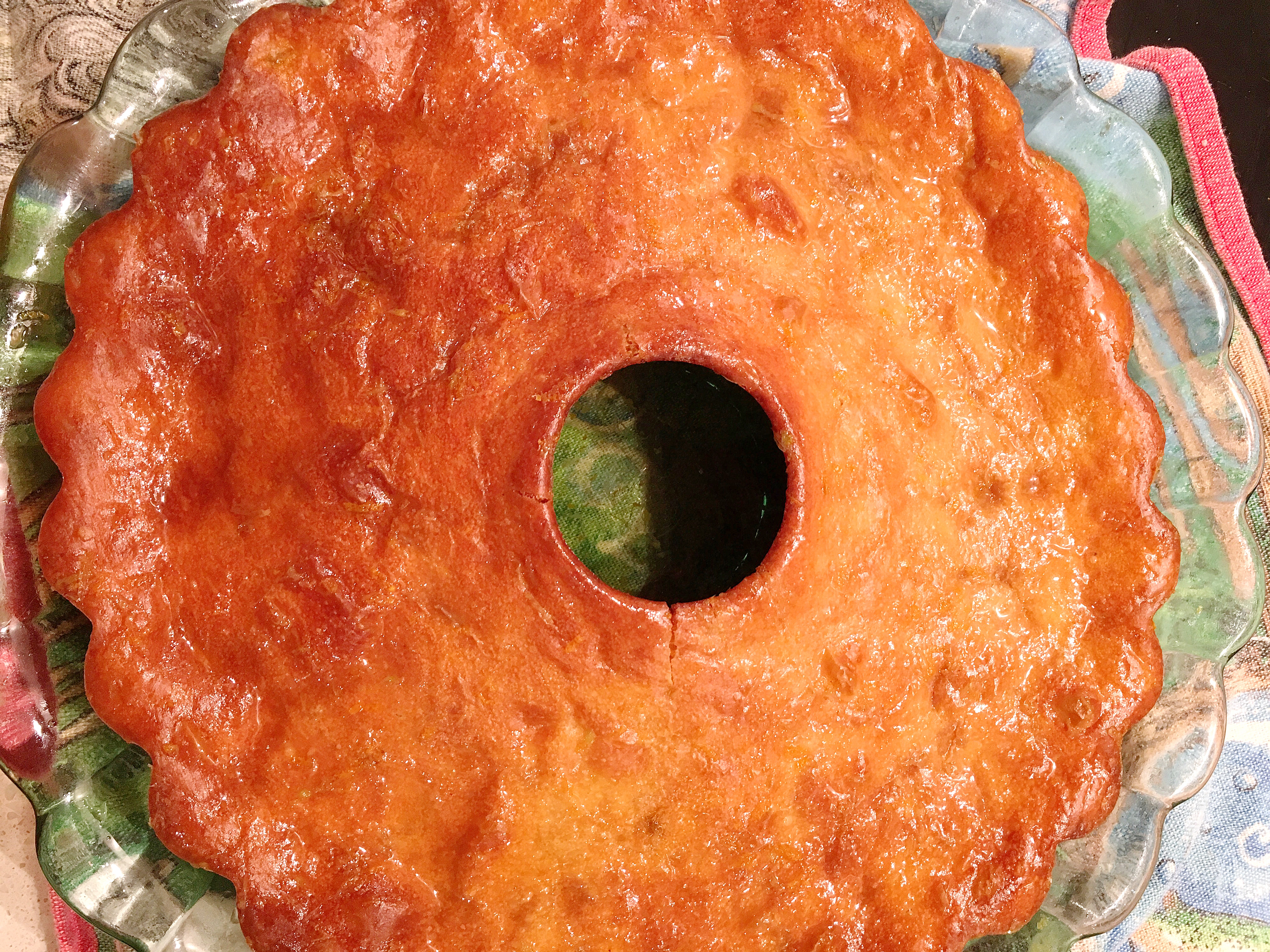 Babà made in the traditional mould 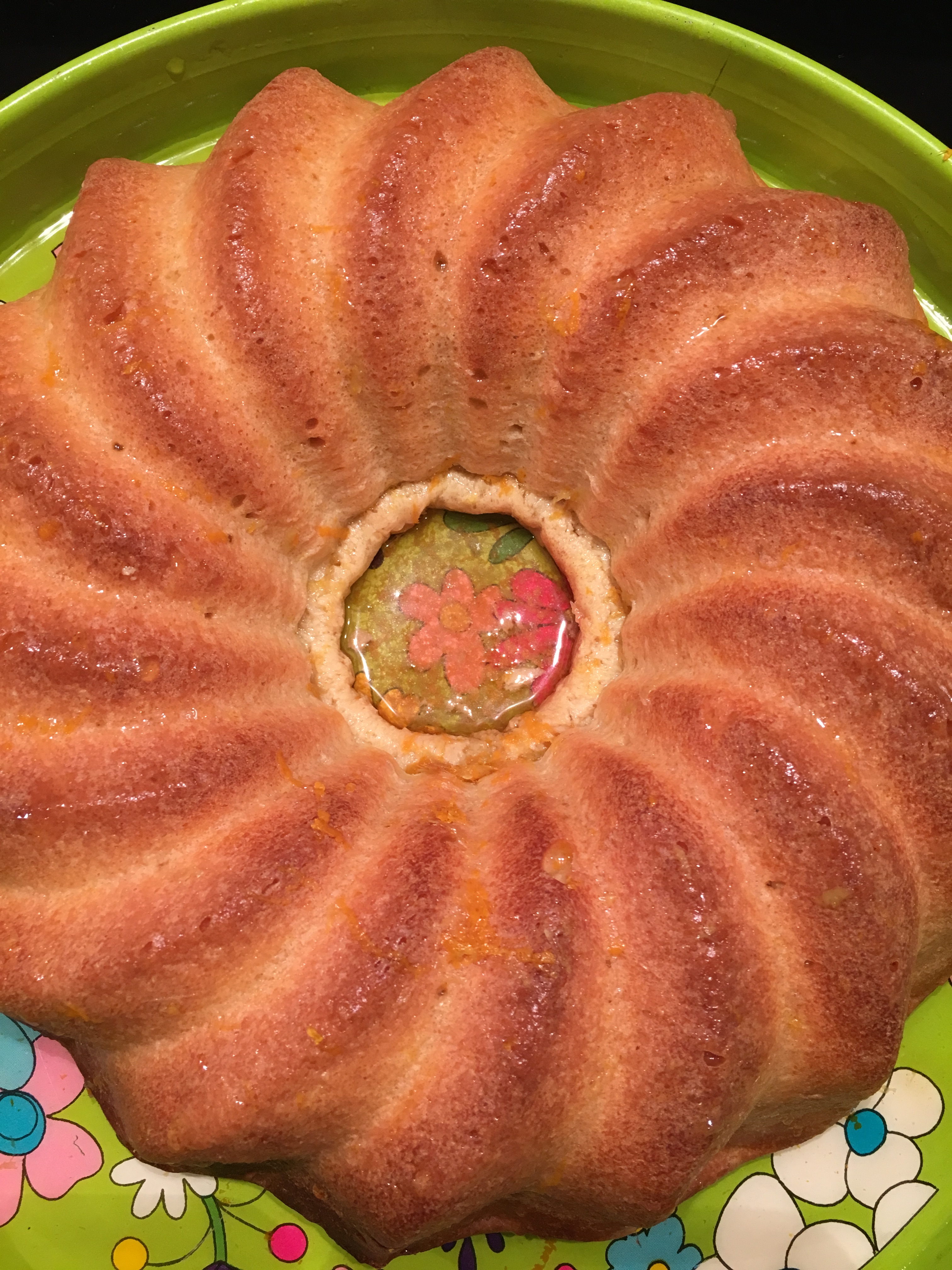 Babà made in a silicon circular mould 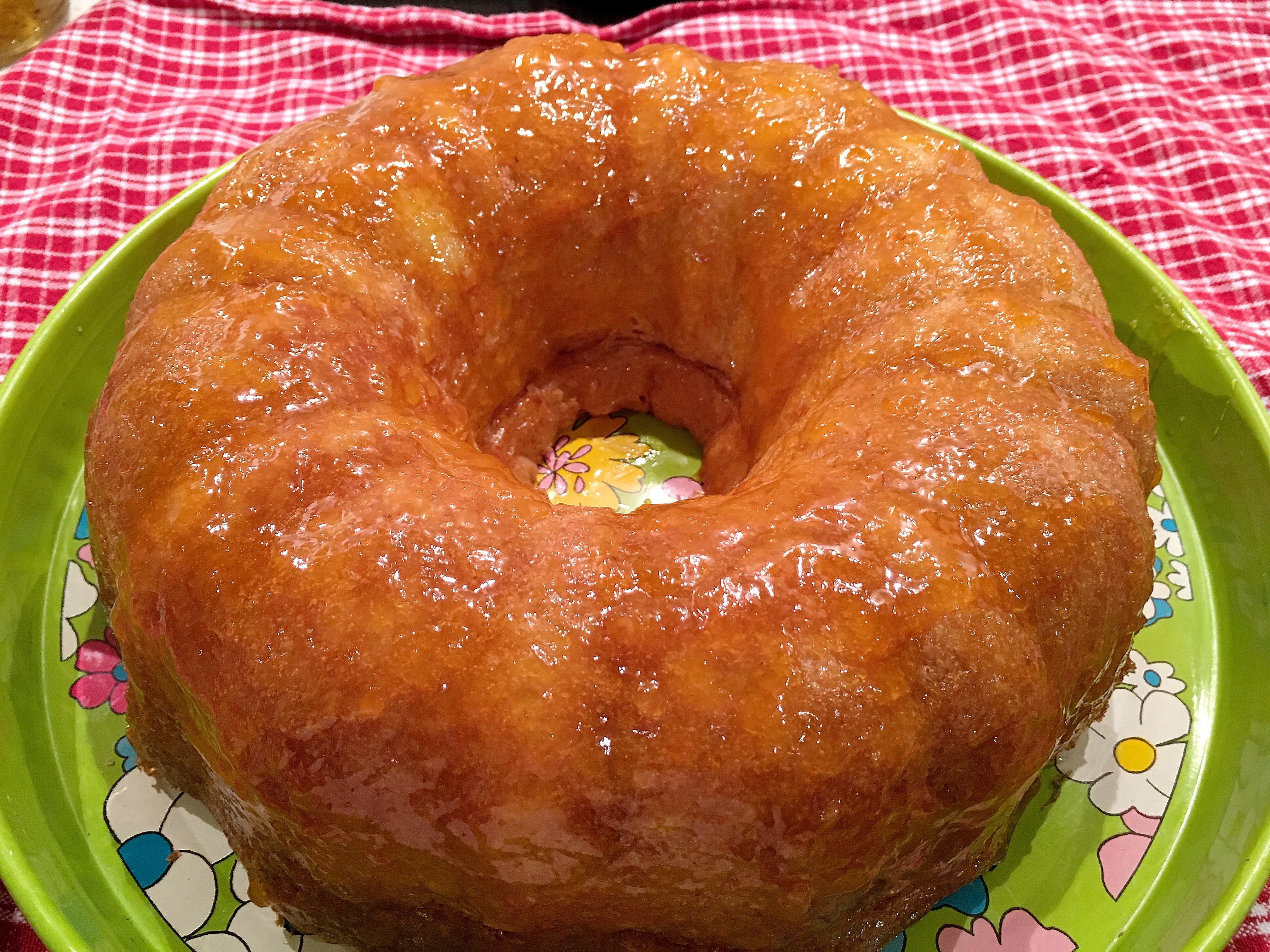 Babà made in bundt mould and glazed with apricot jam

The cake will keep for a few days, just make sure you cover it to keep it moist. 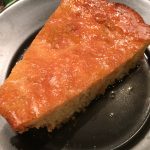 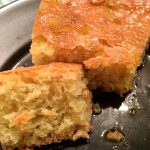