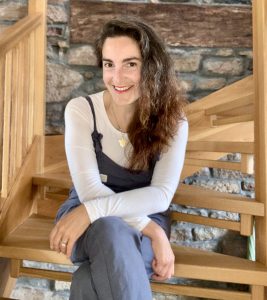 I’m Emilia A Leese, co-author of Think Like A Vegan: What everyone can learn from vegan ethics, published by Unbound, and podcast host – that’s also called Think Like a Vegan. I’m involved in a re-wilding project in Scotland. I edit the quarterly magazine for The Heath & Hampstead Society in London. And I’ve developed life skills and ethics workshops for underserved youth. Professionally, I’ve been a corporate finance lawyer for over 20 years.

I grew up outside Napoli, Italy. My family moved to the US when I was 11. Over the years, I’ve lived in Paris, Bangkok and Singapore. Since 2001, I’ve lived in London. And since 2010, part-time in the Highlands, Scotland.

The book is available in all bookshops and on audiobook and the podcast is on all podcast platforms.

What you’ll find on this site

Why Good Eating? Because we owe being good to ourselves and to all fellow animals.

On this site, you’ll find a variety of essays, vegan recipes, cooking tips and events.

With respect to food, my primary focus is on making Neapolitan and Italian dishes, many of which are inherently or traditionally vegan. I’ve also learned lots about Scottish and British food and you’ll find lots of recipes for traditional dishes here.

My dishes are generally manageable and without many specialised ingredients. Most of the ingredients I use are easy to find in local supermarkets (at least in the UK). Unless they come from the garden or a farm, I buy all my fruits and vegetables from my two neighbourhood fruit and vegetable shops.

In my essays, I primarily write about veganism. I hope to challenge you to think about your daily ethical decisions relating to animal use. Anyone can understand the concepts underlying veganism because they’re all based in the simple concept of fairness. I also write about travel and film, two big passions of mine.

I speak to hundreds of people each year in conferences and vegan festivals, including the Vegandale Food Drink Festival and recently the Himalayan Vegan Festival in Nepal.

I’ve prepared all the dishes (unless otherwise stated) and these are all my photos.  I assert legal and moral copyrights over my written and photographic material.