A Christmas Carol… THE classic Christmas, no? And what dessert takes centre stage in that story? Yes, you guessed it, the Christmas Pudding.

For the last many Christmases, Mr. GoodEating and I have been making our own Christmas Pudding and Christmas Cake. We bring these festive treats wherever we may be celebrating Christmas. Before making ours, I never liked fruit cakes, but these… oh these are totally different and utterly delicious. They last forever, so you’ll be tucking into them until Spring, if there are any leftovers.

We like to prepare our Christmas Pudding in September or October so that it has plenty of time to mature. Some people prepare it a year in advance! We store ours in a cupboard under the stairs. It’s weird and wonderful. How can one not love something like this?

I must admit that my favourite part of the Christmas Pudding is flaming it. Yep, dessert and you set it on fire at the table. It does not get better than that. Even Dickens thought so, and described the Christmas Pudding at the Cratchit’s “like a speckled cannon-ball, so hard and firm, blazing in half of half-a-quarter of ignited brandy, and bedight with Christmas holly stuck into the top.” 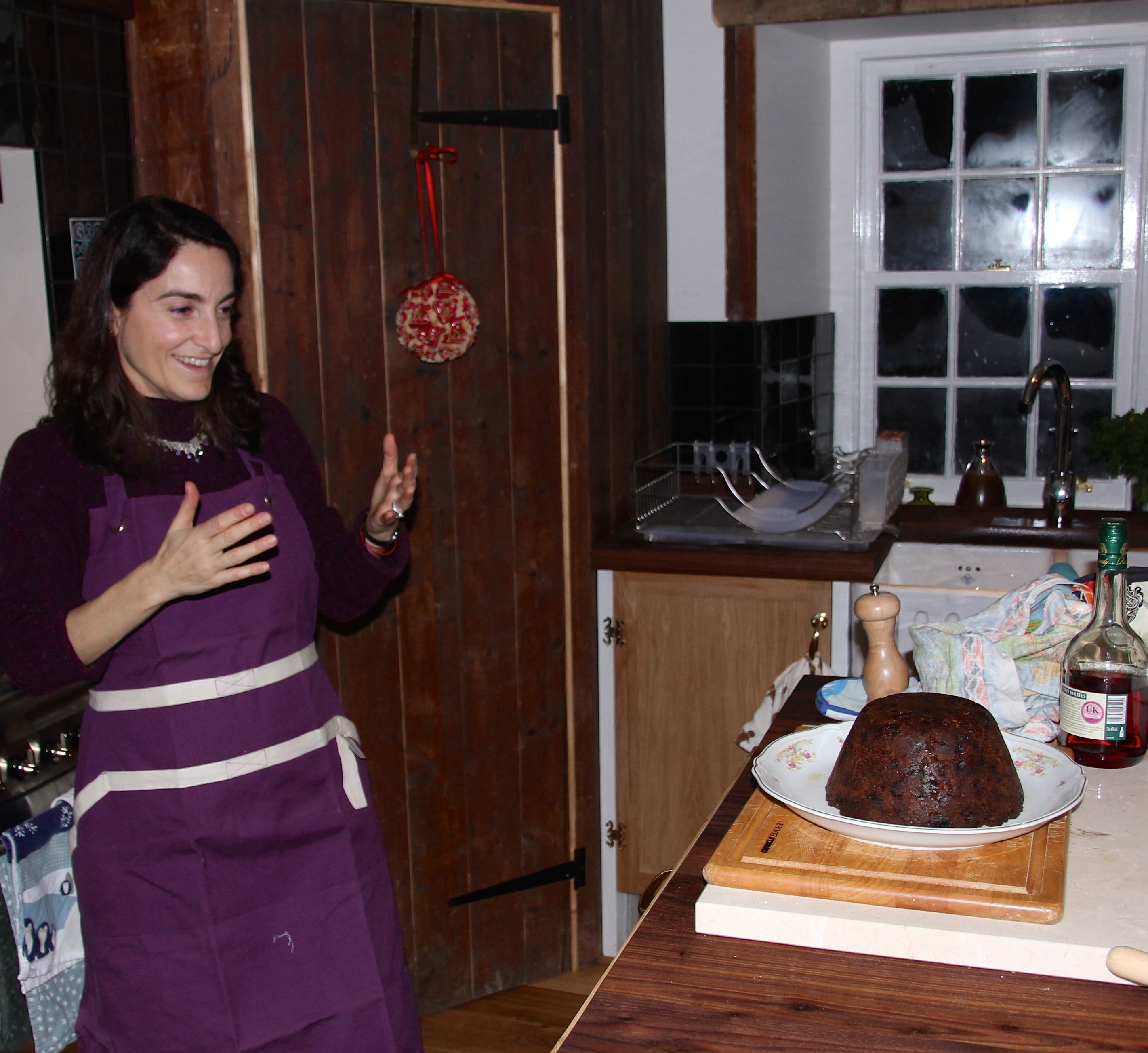 Flaming the Christmas Pudding… but you can’t see the flames!

Set aside 5 hours to prepare and steam this pudding.
Ingredients

Grease pudding mould with coconut oil and have ready a large saucepan into which mould will fit.

In a large mixing bowl, whisk/cream together the coconut oil and sugar until it is well amalgamated and has lots of air bubbles in it..
Fold in the yoghurt a little bit at a time. Folding helps retain the all important air bubbles.

Sift the flour, salt, baking powder and spices atop the creamed mixture. Lift the sieve up high. Don’t skip this step. Airing the flour is key to good baking!
Add the remaining ingredients with enough rum/water to make a soft but heavy mixture. Mix well.

Spoon into pudding mould, cover with a piece of pleated parchment paper and then a piece of tin foil.  Tie securely with string. 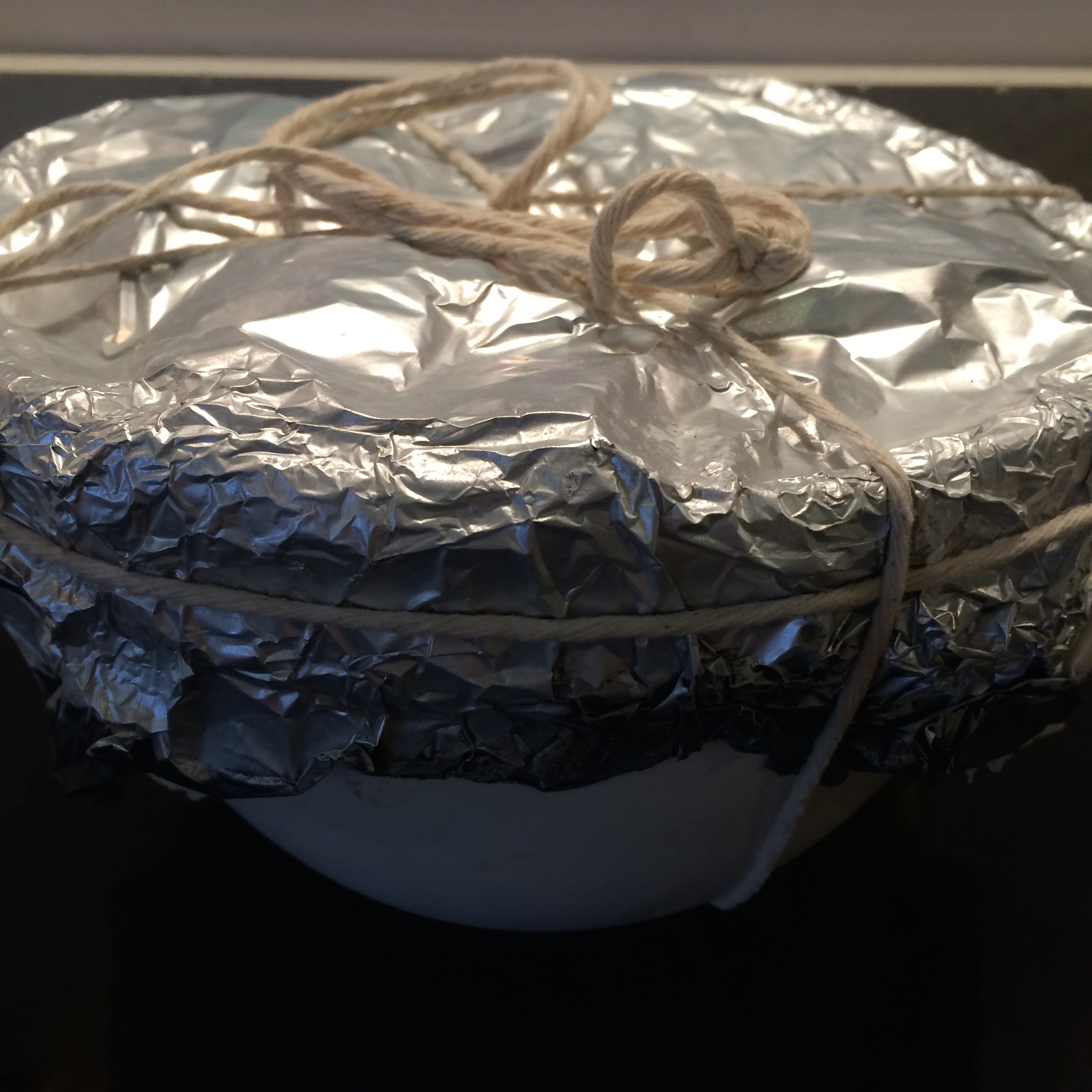 Christmas Pudding all tied up for steaming

Put mould into saucepan and pour in enough boiling water to come up halfway up the sides of the mould. Bring to a boil, the cover the saucepan and steam gently for 4 hours.

Remove pudding from saucepan, allow it to cool, then store in mould in cool, dry place. The pudding will mature, so you can make this well ahead of time (eg: in September).

Steam pudding again (in the same way you did the first time) for three hours before serving, then remove the paper and foil and turn the pudding out onto a warmed serving plate. You can now either serve it like it is (with a sprig of holly as a decorative touch) OR you could add some flames!

To flame the pudding, use a large metal ladle filled with brandy. Then heat the ladle (and, with it, the brandy) over a flame for a minute or so, depending on the flame. Be sure to use a glove. Then, light the brandy in the ladle and pour the flaming substance over the pudding. Serve immediately and consider doing the flaming at the table for full effect as it only lasts a few seconds).

Whether you celebrate Christmas or any other Winter holiday, do the right thing: let All beings live. You can go vegan right now.

« One Year Buying No Clothes or Shoes
The Best, Booziest and Vegan Christmas Cake »