There’s so much going on in this recipe: cooked lettuce, umami, history, tradition… all my favourite things.

Let’s start with what is this. This is a savoury stuffed pie that is typically Neapolitan. In the 19th and early 20th century, this pie would have been eaten on Christmas Eve as a light fare because no animals other than fish were consumed on that day. I don’t get the logic either, but there you go.

In 1836, or possibly 1839, the first written recipe for this dish appeared in the wonderful cookbook, partly written in Neapolitan (now recognised as a language by UNESCO), by Ippolito Cavalcanti, a Neapolitan nobleman. His book not only contained his own recipes reflecting the cuisine of the noble classes, but it was also a collection of the home cooking  done by the lower classes in Naples – cucina povera in all its glory.

Our noble Cavalcanti may have needed an editor because he titled the book: Cucina teorica-pratica col corrispondente riposto ed alcune nozioni da scalar … con in fine una cucina casereccia in dialetto napoletano. And this translates to the tongue rolling: Theoretical and practical cooking with corresponding secrets and certain lessons to  learn … and finally, home cooking in Neapolitan. This book must have been meant to ensure full employment for chefs and cooks!

Let’s talk about “tradition” for a moment. People love tradition. They hold it so strongly and they believe that tradition binds them to do something in a certain way because it has always been done that way. Well, things are not always as old – or as always been – as we like to think. This dish is “traditional” and all Neapolitans will agree with gusto. But it is actually not. Cavalcanti’s recipe looks nothing like the “traditional” dish of today because his recipe called for no dough whatsoever; it was more of a tomato and fish based stew. So, today’s “traditional” dish has evolved from something else entirely.
Let’s continue the tradition discussion and move to fish sauce… and it IS relevant because this explains one of the key ingredients of this dish. The first printed instance of fish sauce appears in the 2,000 year old Roman cookbook Apicius. They called it garum and liquamen (they were two different types), but the Ancient Greeks are credited for inventing it between the 3rd and 4th centuries BC. These were stinky, fermented sauces and they provided the umami that humans love. The Greeks and Romans had a roaring trade in this fish sauce and it was used daily by pretty much everyone.

Since then, Europeans seem to have forgotten fish sauce, but only sort of. The English used to call it fishpickle and it was adapted from the Indonesian kecap (from the Chinese ke-tsiap). See where this is going? Yep. Ke-tsiap evolved into the ubiquitous all-American ketchup (except it’s not, it too is an import!). Fish sauce is still ubiquitous in Asia, where you will find it in Japan (ayu, ishiri and a few other types), Vietnam (nuoc mam), Thailand (nam pla), Burma (ngan by a yay), Lao (nam pa), Cambodia (teuk trei), Philippines (patis) and Korea (jeot gal). For a full history of the evolution of fish sauce, find a copy of Meatpaper‘s “Fishue” (issue Nineteen), and read the fascinating article by Sophia Hussain, “To Explode in Slow Motion: The ancient history of fish sauce” (great little magazine, by the way).

In Italy, although fish sauce per se no longer exists, as my friend MP astutely pointed out, today lots of dishes  contain anchovies that have been cooked so they completely dissolve in the base sauce – and this provides an equivalent umami to the fish sauce. One of the “traditional” ingredients that a Neapolitan will tell you is absolutely necessary for the Pizza di Scarola is the anchovies with which the vegetables are then cooked. Well, what does this “tradition” tell us? Two things: 1) we’ve modified the tradition because we’re not using garum or liquamen, so is it a tradition at all? and 2) that we need umami to make this dish taste good. Great! We can bring out the umami without disturbing any anchovies and continue to evolve this “tradition” in fairness.

Whatever its tradition, this dish is so good that it crept onto Neapolitans’ tables after Christmas Eve and now you find it being sold all over and eaten as an on-the-go snack. Its flavour is agrodolce, sweet and sour and Neapolitans love that.

You may prepare this dish as described below or you may just make the filling and use it as a side dish. Obviously, that has fewer calories and fats and it is just as tasty.
The main ingredient is escarole. In some countries that is its only name; however, it may be called broad-leaved endive/Batavian endive/Bavarian endive. If you cannot find it, you can use frisée, which is also called chicory. As it happens, escarole and frisée are in the chicory genus, just different species. You may also use Swiss/green chard (the large green leafy kind with the white stem rather than the rainbow chard because Swiss chard is sweeter). Swiss chard is also traditional for this dish and gives it a slightly different name in Neapolitan: pizza con la jeta.

If none of these vegetables are available to you, then use kale (without stems) or spinach (so long as you use two to three times as much and you steam cook it separately and drain it well) or even radicchio or Belgian endive or any other leafy vegetable that is a bit bitter. Remember, you are going for a sweet and sour flavour.
Here we go with the recipe … finally. Serves four. 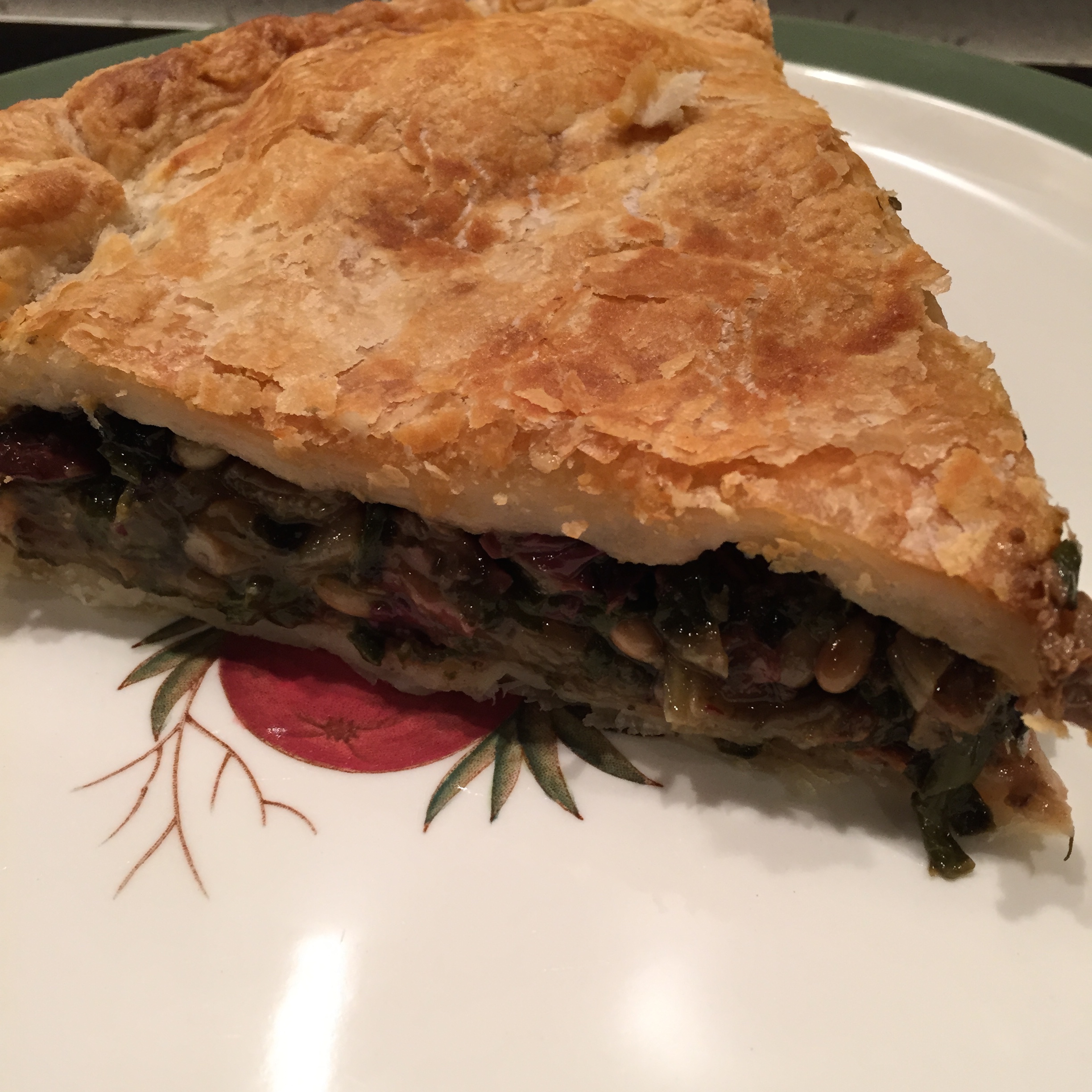 Method
Pre-heat the oven to 200C (or 180C if fan assisted).
Soak the sultanas in a bit of warm water and set aside for a few minutes until they are puffy and soft.
Ensure that your vegetables are washed and very clean. Escarole can be very sandy.
Use a 9-inch (23cm) pie dish. Line the dish with parchment/baking paper and arrange the bottom of the pie crust carefully in the dish. You will need to blind bake the bottom crust (not the top). I like to prick the crust all over with a fork and use the beans method (see here for a helpful guide). After blind-baking, take out of the oven and set aside while you prepare the filling.
Heat oil in a large, lidded saucepan on medium heat. Add the garlic and cook until slightly golden. Then add the olives, nori and tamari and cook until the nori has wilted thoroughly. If you need to, add a tiny bit of water or more oil if that’s more your thing. Now add the escarole, mix and cover with a lid until the escarole has wilted. It will fill up your saucepan. Once you have room to manoeuvre in the saucepan, add the sultanas, capers and pine nuts, mix well and cook for five minutes or until all the ingredients are well mixed (see photo below). You may need to lower the heat, depending on your cooker, to avoid burning. Taste for seasoning and add salt if necessary. Remove and discard the garlic! 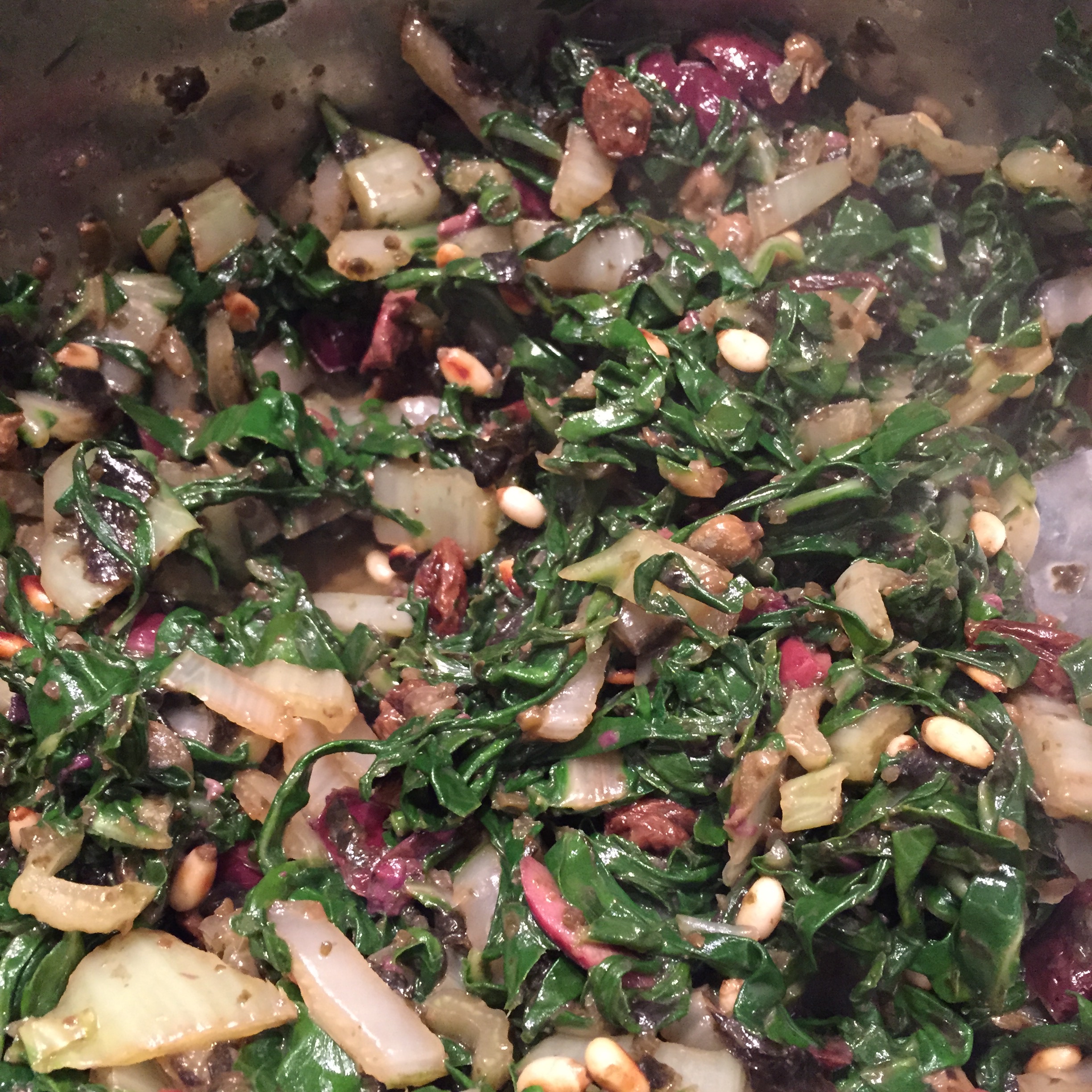 Once it’s all cooked through, take off the heat and set aside to cool. Before it can go into to the pie shell, it should be cool to the touch, but can be tepid.
Put the filling into the crust (see photo below) and cover the pie with the pie top. 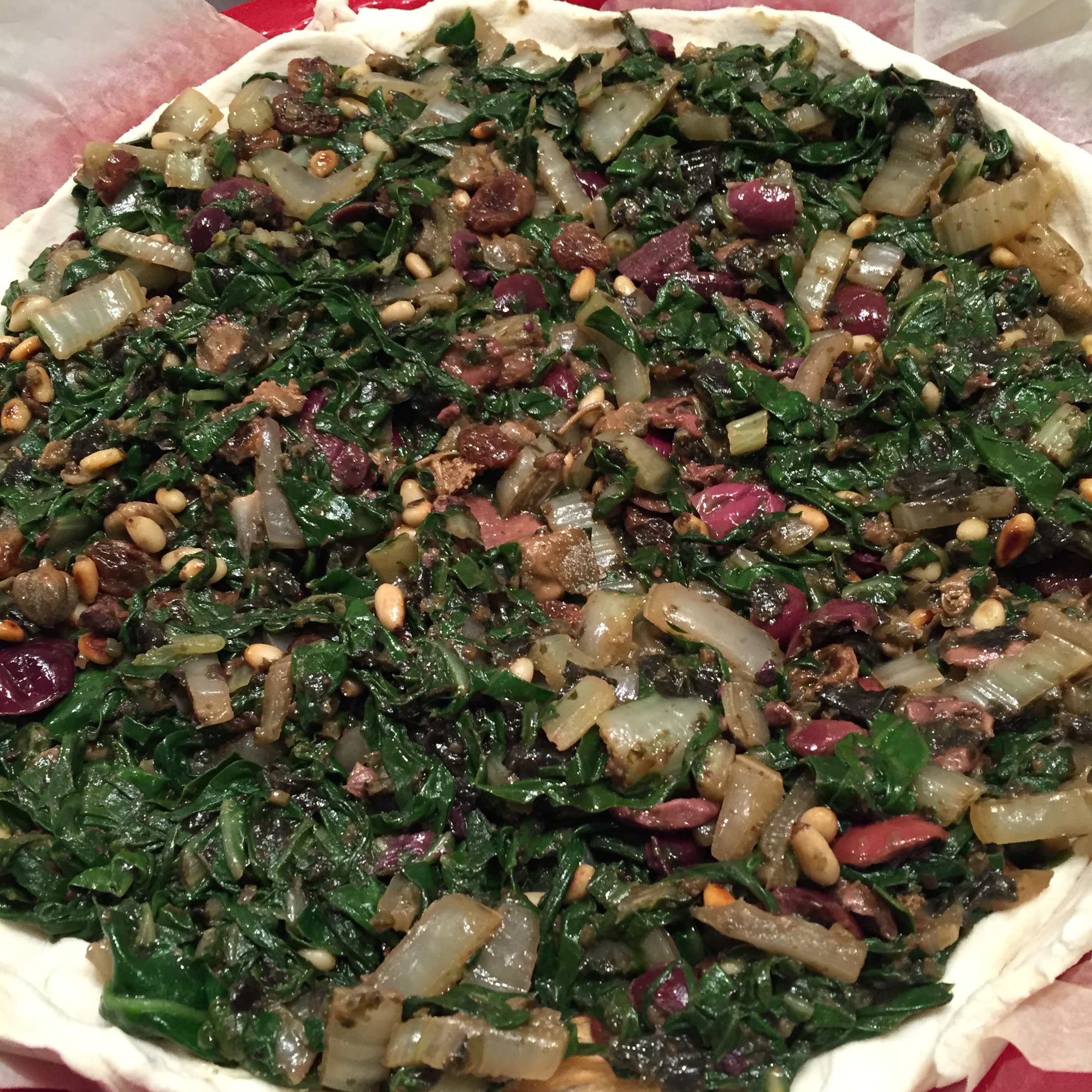 Place in oven and cook for approximately 30-40 minutes depending on your oven. This is what is looks like fresh out of the oven.

Let it cool on a cooling rack before serving warm or cold. The pizza di scarola keeps well for a few days and is even better the next day, cold! You may serve it as a starter if you cut it up into squares, or a side dish, or a snack or as the main event with a side salad. It’s whatever you want, really. 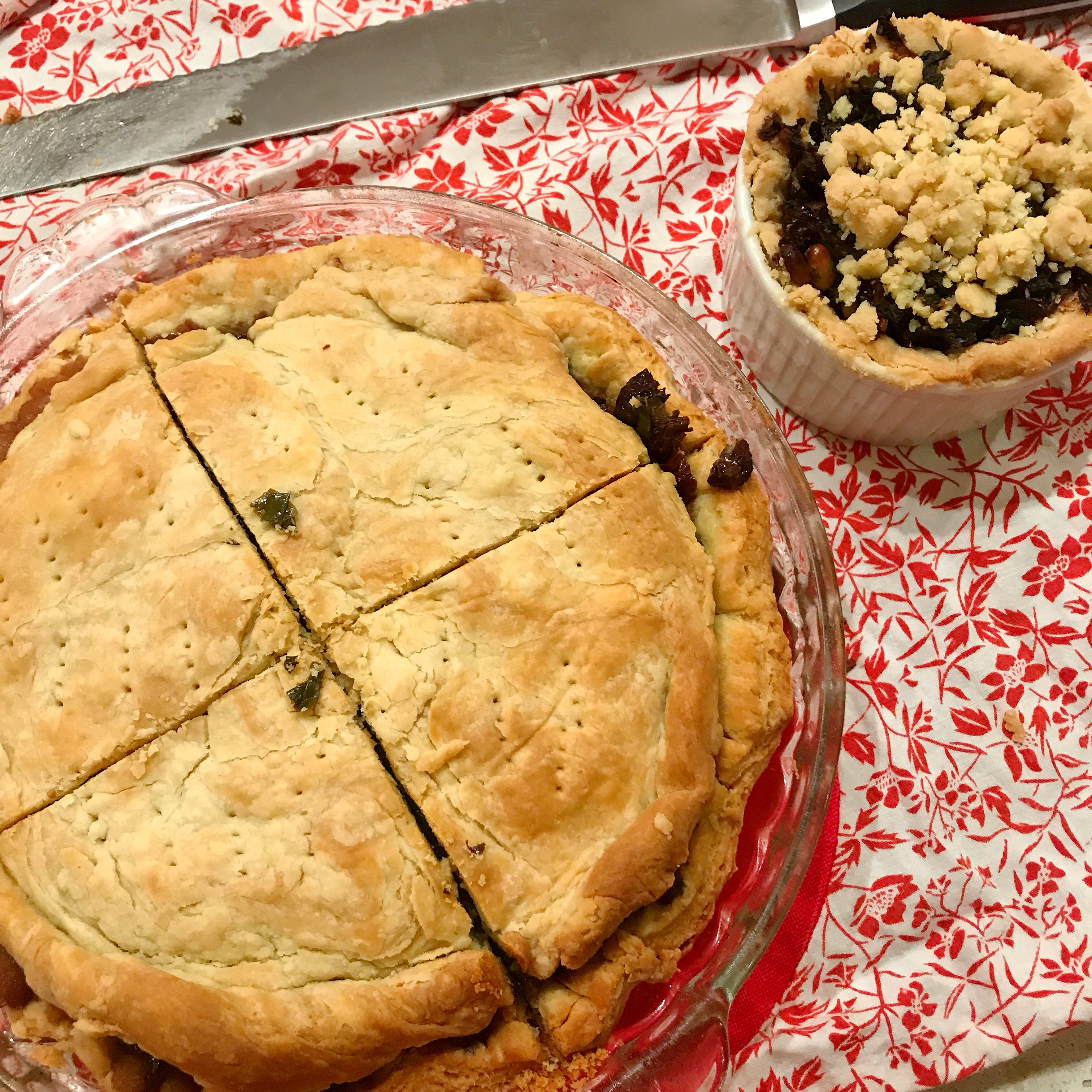 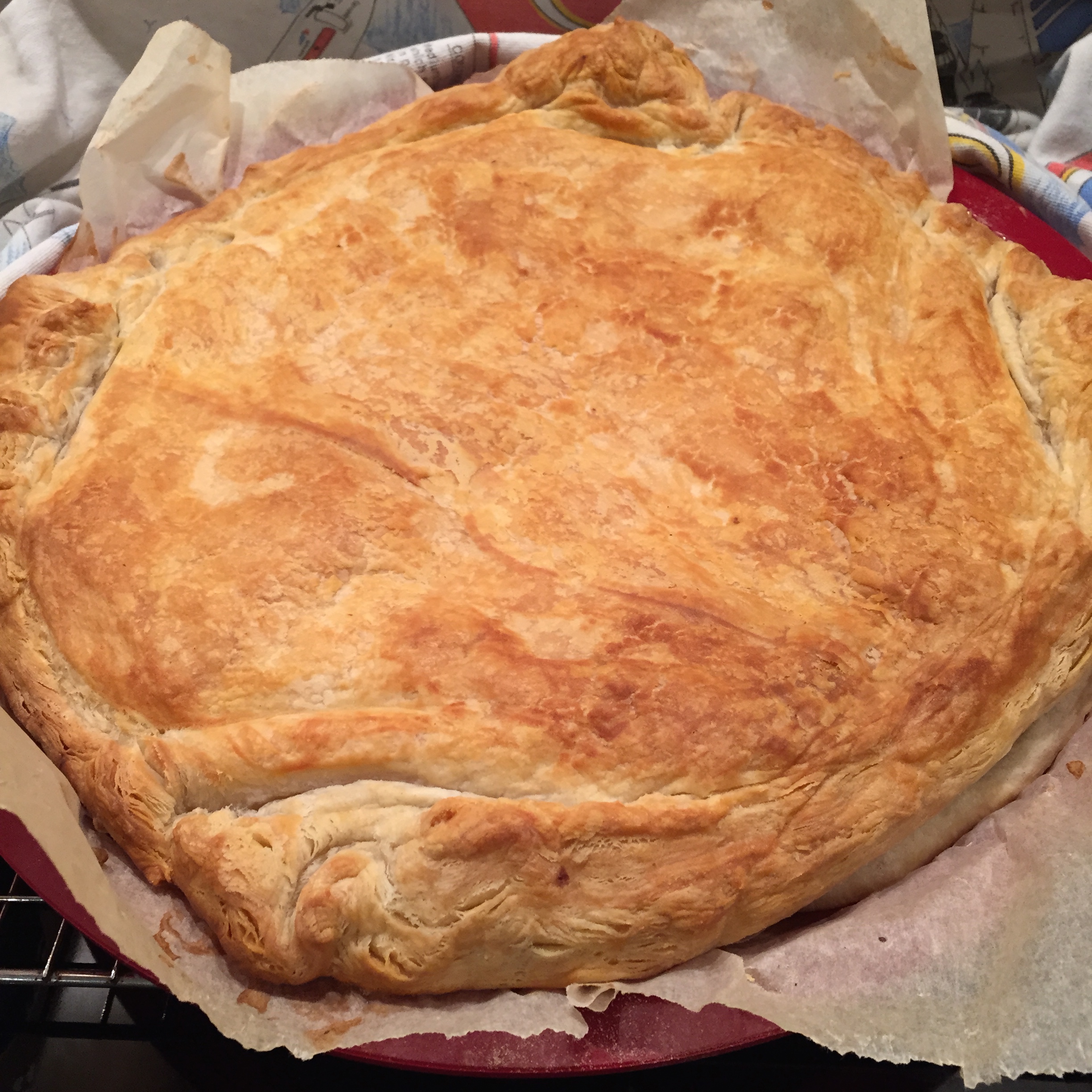 Tradition does not make things right if the tradition is inherently unfair. Just because we have traditionally used animals as food, it does not mean it is right or fair. Going vegan is simply a matter of simple fairness and justice we owe to the most vulnerable. And it’s easier than ever.