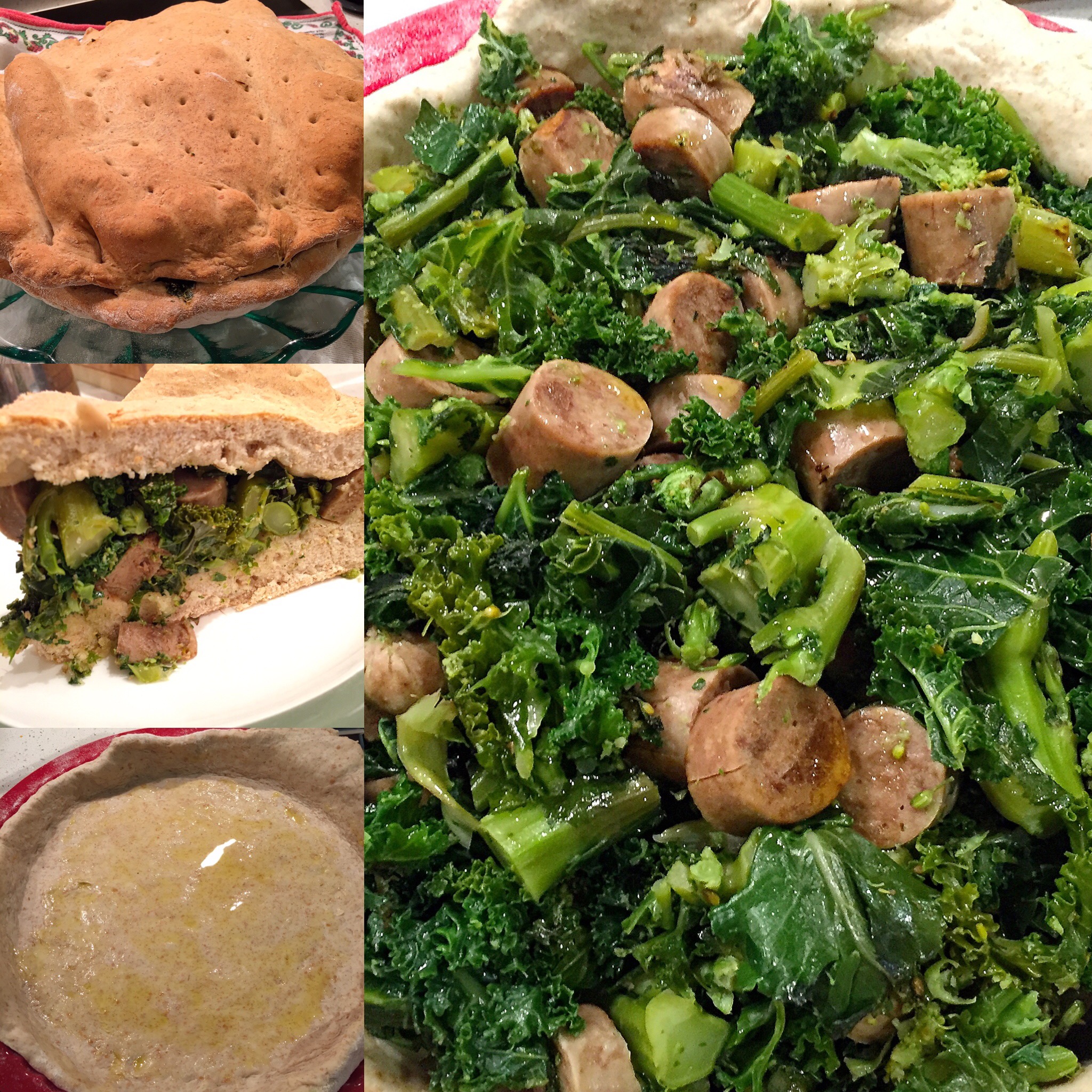 My cousin Dana asked me about this recipe and a good thing too. It’s easy, delicious and I had been wanting to make this for some time. This is a typical Neapolitan dish found pretty much all year around. Pizza in Napoli doesn’t just mean the flat round food we automatically think about. It is often, like in this case, a reference to a savoury pie.

There’s an old Neapolitan saying that alludes in no uncertain terms that sausages and friarielli are perfect together: “A sasiccia è ‘a morte d’ ‘o friariello“. This means that the final resting place for friarielli is sausages. We like drama. It’s true. Even in food. Maybe especially in food. And given that you don’t need to kill a pig to have sausages, then this too can be an inherently vegan traditional dish. You will see that from its simple ingredients, it too is part of the canon of cucina povera.

Authentic friarielli are not easy to find in the UK, so instead, I used a mix primarily of purple sprouting broccoli and added kale leaves for extra bitterness.

I know some of you make your own vegan sausages and I’m in awe of you. I also am very happy when you invite me over to sample them. However, I do not make my own. For this dish, I used Fry’s Family braai style sausages because I like that they’re more savoury than others.

Preheat the oven to 200C if fan assisted or 220C otherwise.

Make the dough because it will need time to rise.

Measure out the flour and place in a bowl. Mix with 1/2 teaspoon salt. Dissolve the yeast in 500ml lukewarm water. Make a well in the centre of the flour and slowly pour in the water. Mix the flour, salt and water/yeast until it is well amalgamated. Then knead on a clean and lightly floured surface for 10 to 15 minutes. Place back into bowl, cover and set aside in a warm space for 60 minutes.

While you wait for the dough to rise, rinse and then parboil the friarielli (for simplicity’s sake this is how I’ll refer to whatever greens you are able to find) in salted water for approximately 10 minutes. If you are using kale, make sure you only cook the leaves and discard the stems. When the friarielli are soft, drain well. Once they have cooled enough to be handled, chop them roughly.
Cook the sausages and set aside. Once they have cooled sufficiently, chop them roughly.

In a large skillet, heat a generous glug of olive oil and the garlic. Stir fry the friarielli in the garlic and oil for approximately 7 minutes, until they’re dark green and well coated with garlic and oil. Add more oil, if necessary. No need to skimp on oil for this dish. Taste for seasoning and add more salt to taste. Mix in the chopped sausages and set aside.

The dough should have risen by now. Punch it down and divide it into two halves.

Take one half and roll it out on a clean and lightly floured surface and place that in the bottom and sides of your pie dish – I used a 30cm/12inch silicone dish. If you are not using a silicone pie dish, then I recommend lining your pie dish with baking paper. 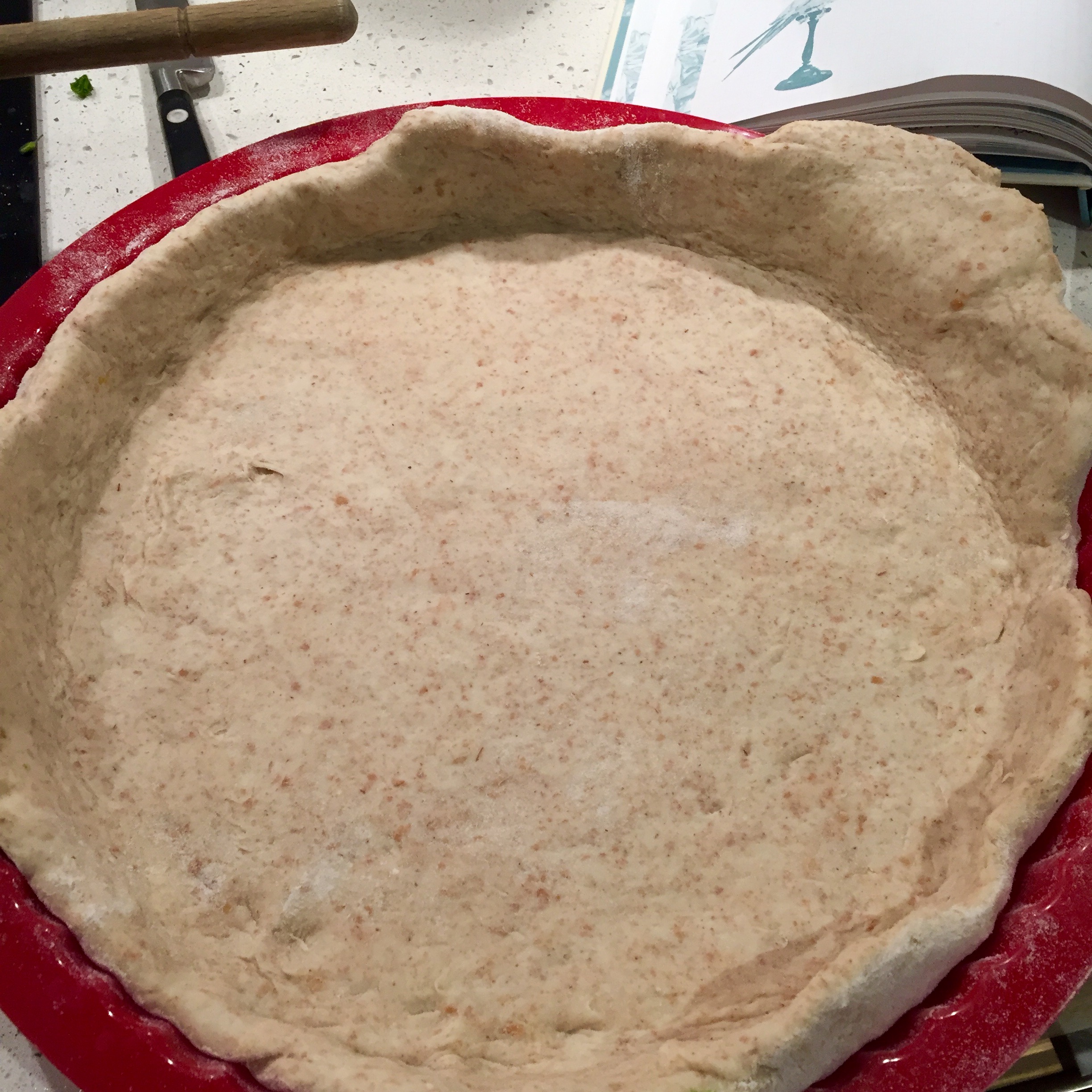 Spread one tablespoon olive oil onto the base of the pie dish. 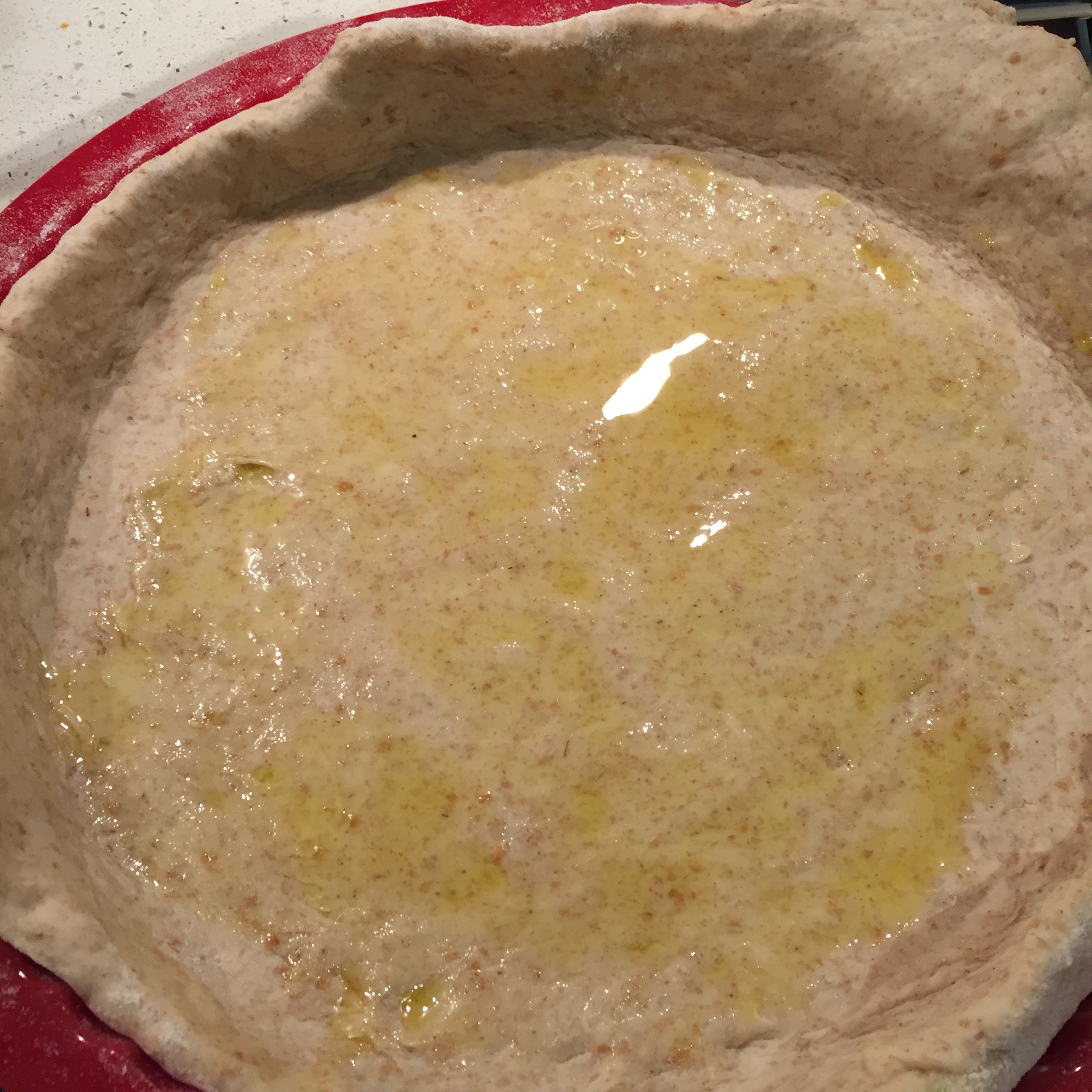 Spoon the sausages and friarielli mix into the bottom of the dish and top off with another glug of olive oil over the mixture. 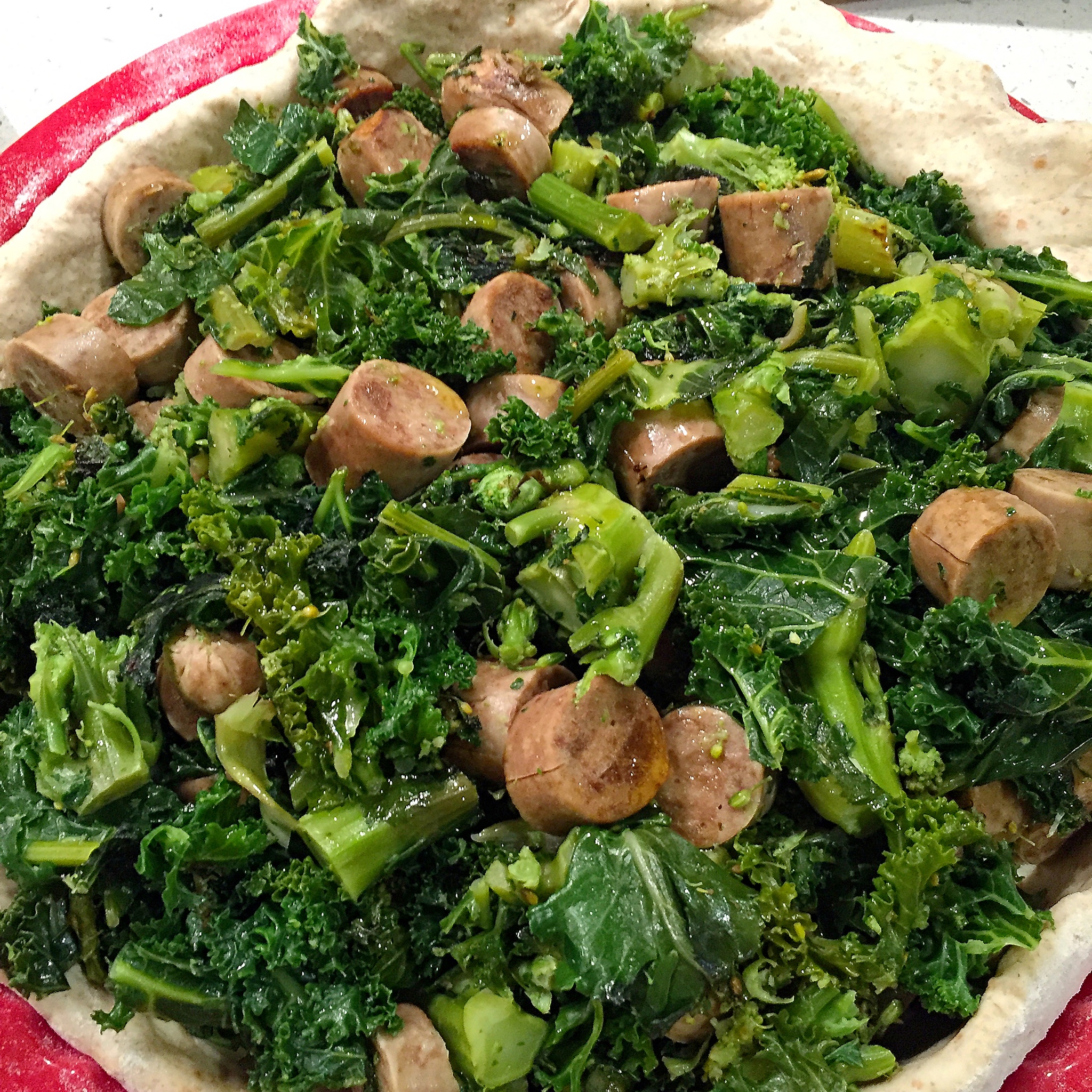 Take the remaining half of the dough, roll it out on a clean and lightly floured surface and arrange it over the top of your pie dish, covering the filling. Pinch down and in any dough remaining on the sides and poke a few holes in the top of the dough. 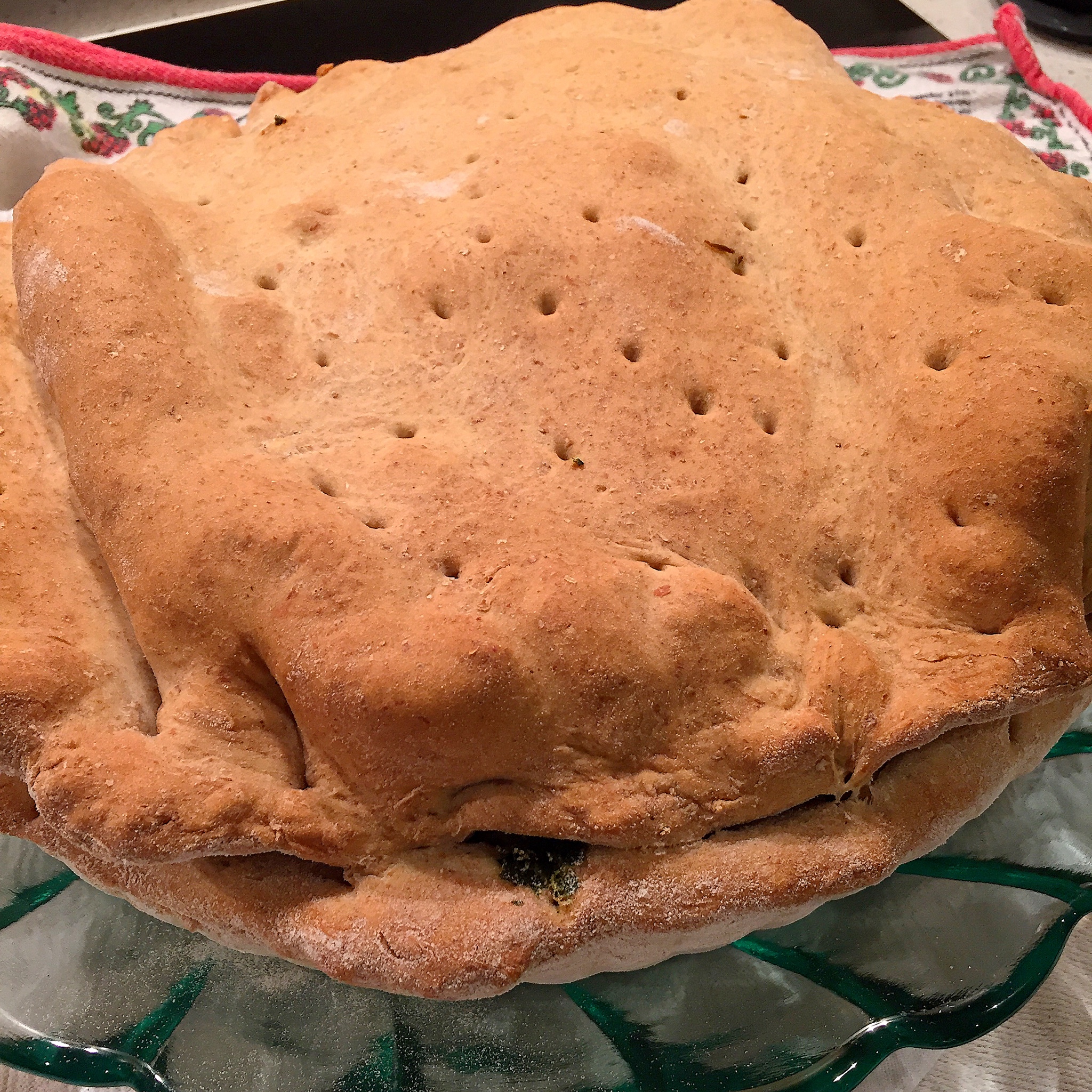 Bake for approximately 20 minutes or until the crust is a golden brown. Serve hot or cold. Keeps well. 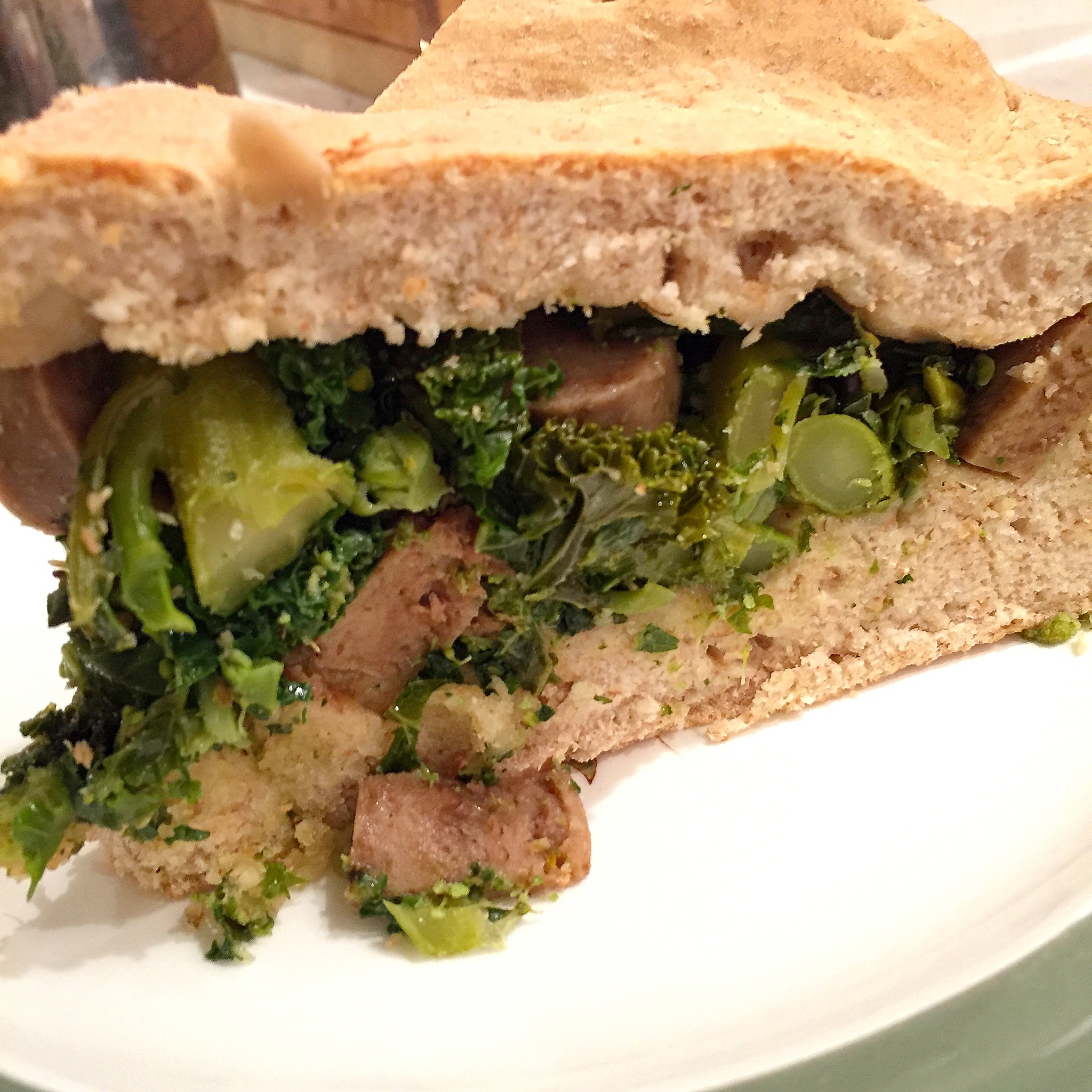