I do not know what cows have done to Josh Tetrick, CEO of Hampton Creek, but it must be something egregious for him to exact revenge by using them in his company’s products. Yes, the darling of all vegans, the plant-based company originally established to replace eggs in mayo, has now deemed dairy to be acceptable – whether in terms of fairness or sustainability – all to satisfy our palate pleasure. Their “Just Cookies White Chocolate Macadamia Nut” contain “whole milk powder, nonfat dry milk [and] milk fat”.

Back in distant 2015, when Hampton Creek managed to rake up a $90 million investment, primarily from Silicon Valley including Bill Gates, Tetrick was in the media touting his company’s sustainability cred. Tetrick said “[I’m] more concerned about changing the world than making money. ‘We’re beginning to have an impact with water not being used, with land not being used, with carbon emissions not being pushed into the atmosphere, with to some extent chicken eggs not being used as much,’ he says. “That’s what we will continue powering away for.’” I guess the memo on the environmental impact of dairy got misplaced and the cow milk “not being used as much” was immaterial.

But just whatever! Hampton Creek is doing their bit for the animals, right? In 2015, the veganverse was all like “yeah the world is going vegan!” But yeah… not so much. All that happened – then and now – is that a company made a product. Then, it capitalised on the expanding demand of plant-based products. Now, when its investors want larger returns, it turns to exploiting the most vulnerable.

I am deeply sceptical that a company that managed to create chicken egg substitutes could not come up with a viable replacement for dairy in this new cookie. The dairy ingredients must be so cheap that the business case, in terms of profit margin of using dairy versus non-dairy and/or market expansion opportunity, must have been open and shut. So, ditch the ethics and the science and just follow the money.

Despite what it seems, this is not an indictment of Hampton Creek. Ultimately, I do not care what they do. They are a company created to make products to fulfil consumer demand, whether vegan or nonvegan. What I care about is what we do, individually.

We need to continue to educate – clearly and simply – so that we change how our friends, colleagues and family perceive animals. Animals are not things and most people already believe that. If they are not things, then we cannot use them as things – as ingredients in white chocolate macadamia cookies. This is basic fairness, justice and it is the least we can do for the animals. It is also the only thing that will permanently alter consumer demand.

Please note that shortly after I wrote this piece, the company changed the presentation of its website and the cookie in question is no longer visible.
This was the nutritional information to which I refer in my essay 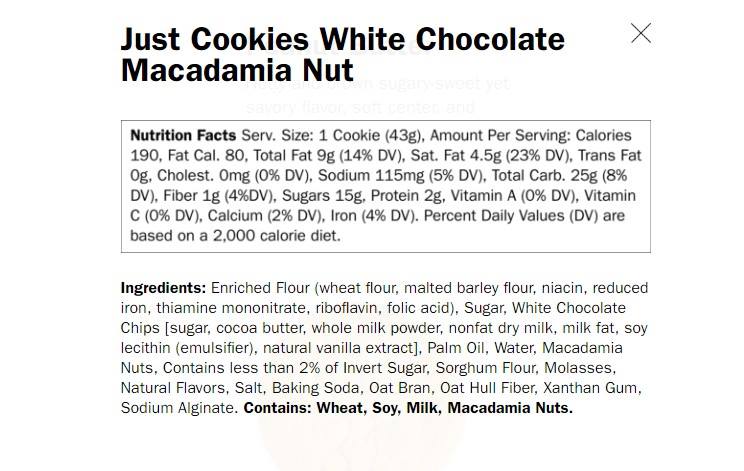 Change the paradigm. Go vegan and educate others to do the same.